Pos Teratas
Student Movement is Timeless; Student Government, Meanwhile, is...
Afghan Women: Their Shackles and Concerns
Reducing Pollution Through Habitual Walking Lifestyle
The Absence of Law Enforcement in Handling Sexual...
A Brief History of Discourse on Animals in...
ARTJOG: About Time, The Past Always Sold
Student’s Freedom of Speech Under The Shadow of...
Tracing The OGBV Cases Management During Pandemic in...
Student Demands amid the Unclearness of Gelanggang Mahasiwa...
World AIDS Day Commemoration: Discrimination and Social Stigma...
InterviewNews

Student’s Freedom of Speech Under The Shadow of Academic Sanctions 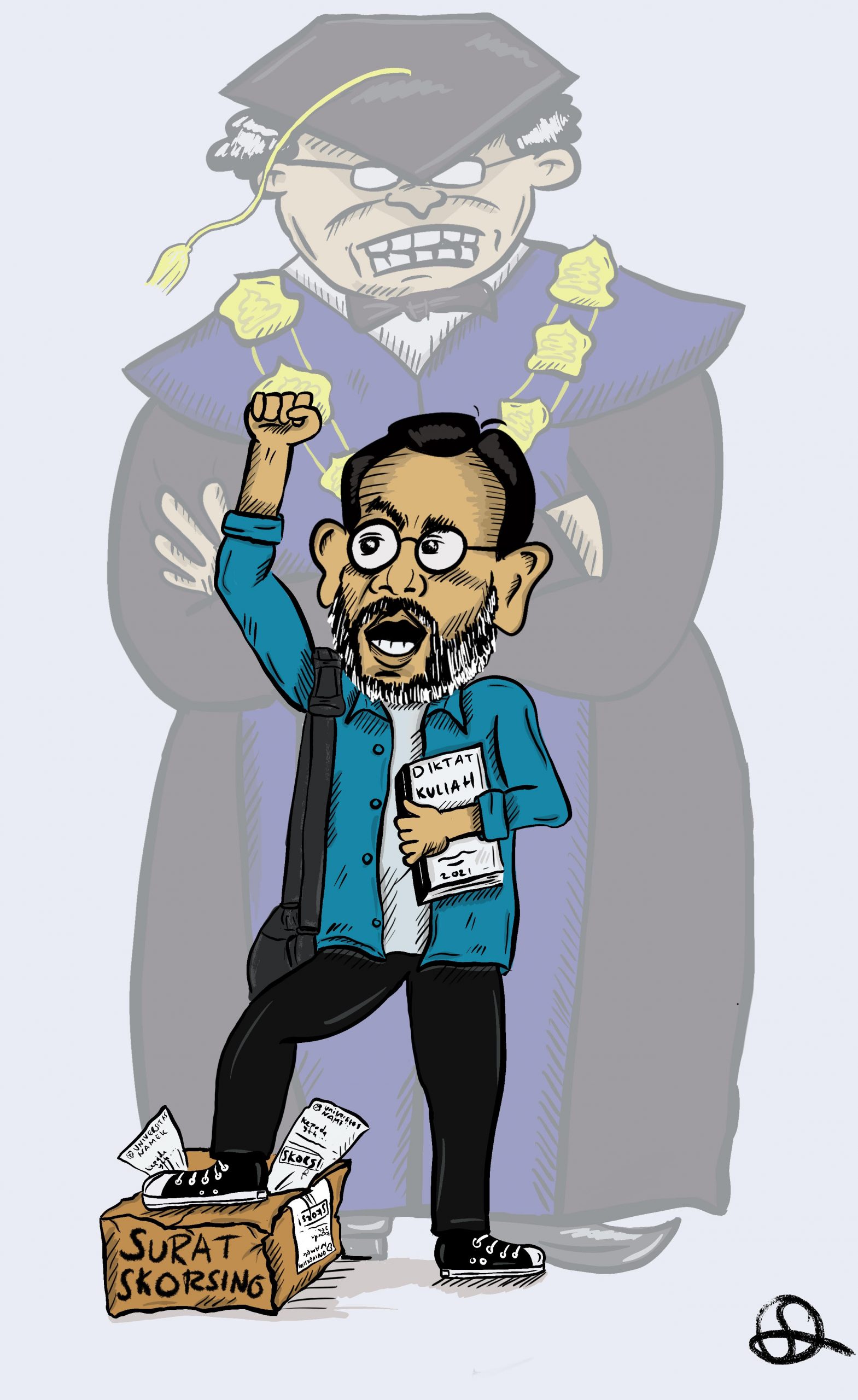 It is an open secret that universities often violate student’s freedom of speech. Those violations
occurred through the imposition of academic sanctions in the form of dropouts and suspension.
These forms of academic sanctions were increasingly being imposed by the rectorate on the
students who actively criticized various issues, including campus policies. The latest cases
happened to nine students of Universitas Teknokrat Indonesia Lampung and three students of
Universitas Lancang Kuning Riau who were dismissed without previously receiving any
memorandum.

The results of Lokataru Foundation’s 2019-2021 monitoring related to academic freedom
showed that at least seventy-two students were sentenced to drop out and suspension due to
student involvement in demonstrations criticizing campus policies and transparency. Rector of
the Universitas Nasional (UNAS) imposed academic sanctions against seventeen students
demanding single tuition waivers. Similar to this case, dropouts were also sanctioned to two
students from the Universitas Bandar Lampung (UBL), four students from Universitas Khairun in
Ternate, and twenty-eight UKI Paul students in Makassar. This also adds to the long list of
campus failures in creating a safe space for freedom of expression.

In response to this problem, Balairung had the opportunity to explore Haris Azhar’s
perspective. He is an Indonesian advocate and human rights activist who was the Coordinator
of the Commission for Missing Persons and Victims of Violence (KontraS) for the period
2010–2016. In addition, he is also the executive director of the Lokataru Foundation which is
currently actively responding to various events related to law and human rights. The following is
the Balairung interview with Haris Azhar.

What is your perspective regarding the rampant imposition of academic sanctions
arbitrarily performed by the campus against students who actively criticize variously
issues?

First, students basically are craving knowledge. When they find a situation that is conflicted
with the ideal situation which they learn, they will express and visualize it with the intention of
criticizing and demanding improvement. Secondly, the campus has become a business field for
the power holders. Therefore, power-holders will try to remove obstacles, which are the
students. Thus, it is not impossible if acts of repression against students are carried out in order
to perpetuate their interests.

Students are a real dangerous group for the government because they are able to threaten and
suppress the ruling government. The government indirectly influences the campus in repressing
students. This resulted in a shift in campus functions which were supposed to protect students
from the regime’s restraints to become regime supporters to control students. The campus
builds local issues with political motives to suppress the student movement. Thus, they can
smoothly run their business and excel in their career inside the university.

Does it mean that there are any interventions from the government?

Not intervention, more precisely, a dominant influence by the ruling government. Therefore,
campuses aim to serve the government’s interests to preserve their trust.

Do the academic sanction issues have anything to do with the ruling government?

Cumulatively, I see that this is related to the increasingly authoritarian government today. This
relation causes the campus to become an instrument in governing, controlling, and suppressing
student’s freedom, as in the case of academic sanctions.

As the legal protection regarding the student’s movement remains vague, how do you
think the principle of academic freedom should be applied?

The principle of academic freedom must be carried out freely. In other words, academic
criticism is supposed to be answered with academic arguments instead of repressive actions
through imposing academic sanctions. It only shows that the rulers barely have academic
qualifications. If critical thinking continues to be eradicated in such dirty ways, the campus would
turn to be a place for ignorants. The campus will no longer produce intelligent generations for the
students’ intelligence formed by situations that trigger debates and contestation of fact
followed by arguments established through methodologies.

With the increasing number of academic sanction cases, could it be said that the campus
has turned into an arrogant and anti-critic authoritarian?

I see that campus bureaucrats and their regulations have transformed into the instrument for
exterminating common sense, rationality, and science; for the sake of power. Therefore, these
cases indeed become the face of authoritarianism on an international scale.

Who should be responsible for the violation of the student’s academic freedom?

The campus bureaucrats, rectors, and the foundations operating on campus should be
responsible for this matter. Since they function to take full responsibility for maintaining the
academic freedom which exists within the campus.

Are there any ideas of advocating the student’s movement which has hitherto been
strangulated? What plans will be pursued later on?

In fact, advocacy has been done many times both within the scope of the student themselves
and the lecturers. Furthermore, Indonesian lecturers have built a community that specifically
focuses on the issue of academic freedom. Several lawyers also participated in the advocacy of
this movement. Many advocacy movements have been carried out for students and there will
be more in the future. There are many plans that are being pursued, starting from publications,
case defenses, or discussions in the development of discourse which certainly would be
performed.

What policy should be taken by the campus in this case of arbitrarily imposing academic
sanctions to prevent it from happening in the future?

Foundations or governments, both private and public, should conduct audits to check the quality
and capacity of campus bureaucrats. This is due to the fact that many campuses make
authoritarian and corrupt policies and are also not qualified as academicians. Qualified
academicians are supposed to respond to everything based on methodology, fact-check, and
argumentation testing. These people should be the leaders on campus, not the sycophants
of materialism.