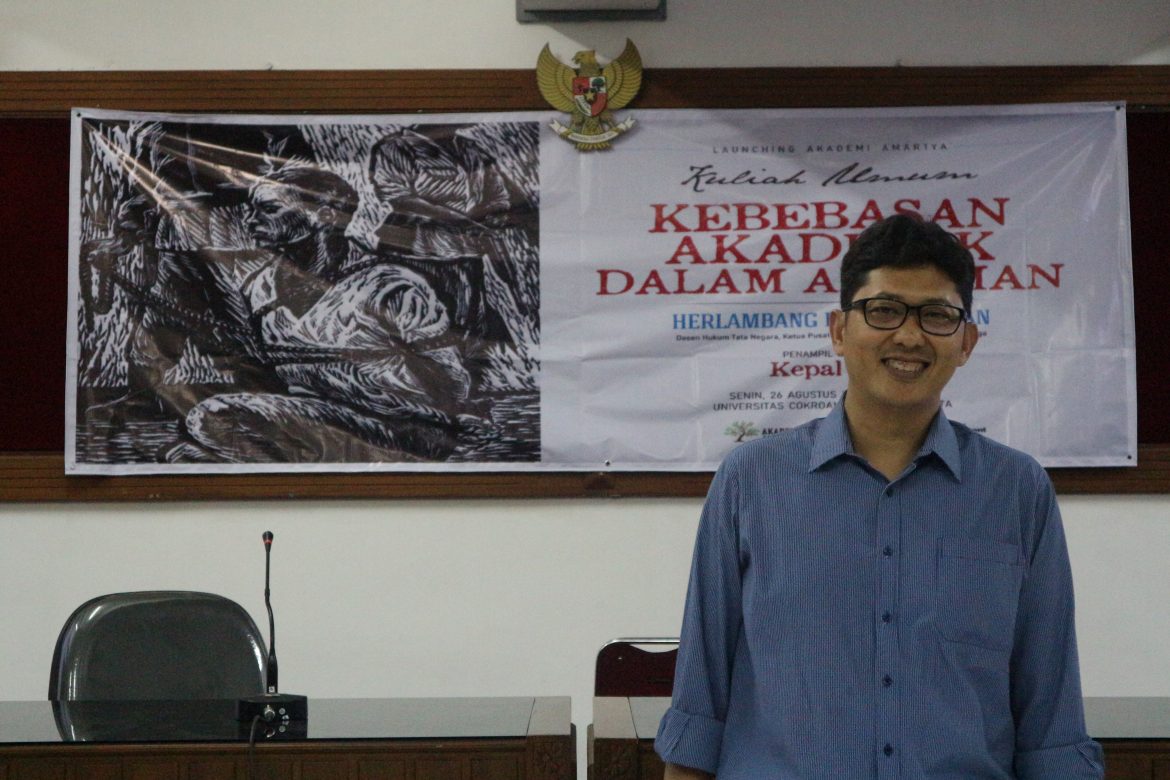 Recently, the threat to academic freedom has been in the spotlight after pressures on several student press agencies at various universities. The campus again finds itself in a situation that was described in Soeharto’s military authoritarian regime. During the New Order era, ideological pressure, restraint in student politics, censorship of books, and restriction on freedom of expression became dominant in the Indonesian academic world.

On this occasion, BALAIRUNG met Herlambang P. Wiratraman, Chair of the Center for Human Rights Studies, Airlangga University, in a public lecture on Academic Freedom in Jeopardy at Cokroaminoto University. This man who often advocates for human rights cases shared the results of his research on academic freedom. Based on the results of his research, more than 60 cases were recorded during the 2014-2018 period with various motivations for pressure. He received reports from students, to criminalization against lecturers. In addition, he also gave his views regarding the situation of academic freedom in Indonesia recently.

What threats to academic freedom are we facing?

The repression faced by the student press increasingly showed a threat to academic freedom. The Student Press (Persma), as pockets of movement and critical thinking, is becoming more and more easily suppressed. Persma seeks to learn journalistic writing standards according to a code of ethics, being professional, investigative and carries public interests. However, at the same time, they are facing censorship and suppression. Repression on academic freedom also takes advantage of stigmatization to communism, intolerance of religious freedom, corporate pressure on campuses, corruptor retaliation, discrimination and racism, and disciplinary issues due to bureaucratization and campus commercialization.

Looking at this situation, is there actually a guarantee of academic freedom on campus?

Given the aforementioned reality, academic freedom is only explicitly mentioned in the Higher Education Law and translated into the University Statute. However, the meaning is not conceptually clear, and legally cannot be used as a reference for the prosecution of academic freedom. That is the reason why the pressure on academic freedom is getting easier on campus.

Why do threats to academic freedom occur repeatedly?

After 20 years of reform, there at least five conditions that have sustained, grown, and at the same time confirmed the threats to academic freedom. First, there is indoctrination and a legacy of authoritarianism. This has survived and developed because Indonesia has failed to resolve past cases of human rights violations. Examples of the consequences of this include attacks on academic activities that are accused of being communist. Also, accusations of spreading PKI teachings and racism against Papuans.

Second, the cycle of violence and impunity nor note being convicted. The act of neglecting legal responsibility makes the campus not a bulwark of freedom that is free from state pressure. Issues that are used to repressed academic freedom include ‘stigmatization of communism’, intolerance of religious freedom, corporate pressure, corruptor retaliation, discrimination, and racism, to disciplinary issues due to bureaucratization and campus commercialization.

Third, bureaucratization and feudalism by giving great amounts of power to the aristocracy. This represents the social structure of society which is busy fighting for influence in structural positions. It is no longer an egalitarian spirit to develop an academic culture, but rather the power of leadership that is increasingly dominant. This can be seen from the case of Julio Harianya at the Semarang State University who was suspended for his criticism of UKT. Also, there is the pressure of criminalization under the ITE Law on the accusation of defamation faced by Saiful Mahdi, a lecturer at the Faculty of Mathematics and Natural Sciences Unsyiah Banda Aceh who criticized one of the campus policies.

Fourth, commercialization of the campus with support from the state. Pressure from the market sustained by the strong role of commercialization of higher education that is sponsored by the state. This has had an impact on academic freedom so that it is trapped in the corporatism of education. Therefore, lecturers and students can easily be disciplined and fired by the corporatism system. This is also what Ritzer (1996) called the “Mcdonaldization of higher education”.

Fifth, the power of capital and politics to discipline and subdue the campus. The university has easily been controlled by the interests of corporations and/or owners of capital, and this affects the operation of the production of social knowledge. An example of this is the case of dismissing the discussion of the films “Samin vs Semen” and “Alkinemokye” made by Watchdoc, May 1, 2015, at Brawijaya University, or “Prahara Tanah Bongkaran”, in Banyuwangi. The film raises the issue of canceling the examination, the counterattack by corruptors or corporations against researchers or experts on campus.

What concrete steps have been taken to demand academic freedom?

The difficult reality of law prompted me and representatives of academic freedom researchers, lecturers, students to gather in Surabaya in 2017 in a meeting initiated by the Human Rights Teaching Union and Center for Human Rights Law Studies, Faculty of Law, Airlangga University. The meeting resulted in the Surabaya Principles on Academic Freedom (SPAF), 2017. Through these principles, advocacy of all forms of threats to academic freedom is pursued by referring to them. This reference is used in amici curiae (Friends of the Court), where the court has the right to accept and invite third parties to provide information or legal facts relating to unfamiliar issues. This happened in the case of Basuki Wasis in 2018. With the verdict that referred to the document, Basuki Wasis was acquitted from the lawsuit of convicted criminal Nur Alam.

SPAF has been adopted as a source of law to uphold the principles of academic freedom, not only in Indonesia but in universities in Southeast Asia. This was done through the South Asian Human Rights Studies Network (SEAHRN) academic association at the University of Sabah Malaysia, in April 2018.

Then, how should academic institutions guarantee academic freedom?

Of course, we need to remember and reassert the role of academic institutions. First, campuses exist not to thicken social structures that legitimize oppression. But the teachings must be to fight and liberate from the oppression that occurs in the community. Second, the campus is a learning center as well as conscientization, which reproduces knowledge for the advancement of human civilization. However, both will only exist and function progressively if the prerequisite for academic freedom is guaranteed.