Pos Teratas
Student Movement is Timeless; Student Government, Meanwhile, is...
Afghan Women: Their Shackles and Concerns
Reducing Pollution Through Habitual Walking Lifestyle
The Absence of Law Enforcement in Handling Sexual...
A Brief History of Discourse on Animals in...
ARTJOG: About Time, The Past Always Sold
Student’s Freedom of Speech Under The Shadow of...
Tracing The OGBV Cases Management During Pandemic in...
Student Demands amid the Unclearness of Gelanggang Mahasiwa...
World AIDS Day Commemoration: Discrimination and Social Stigma...
Discovery 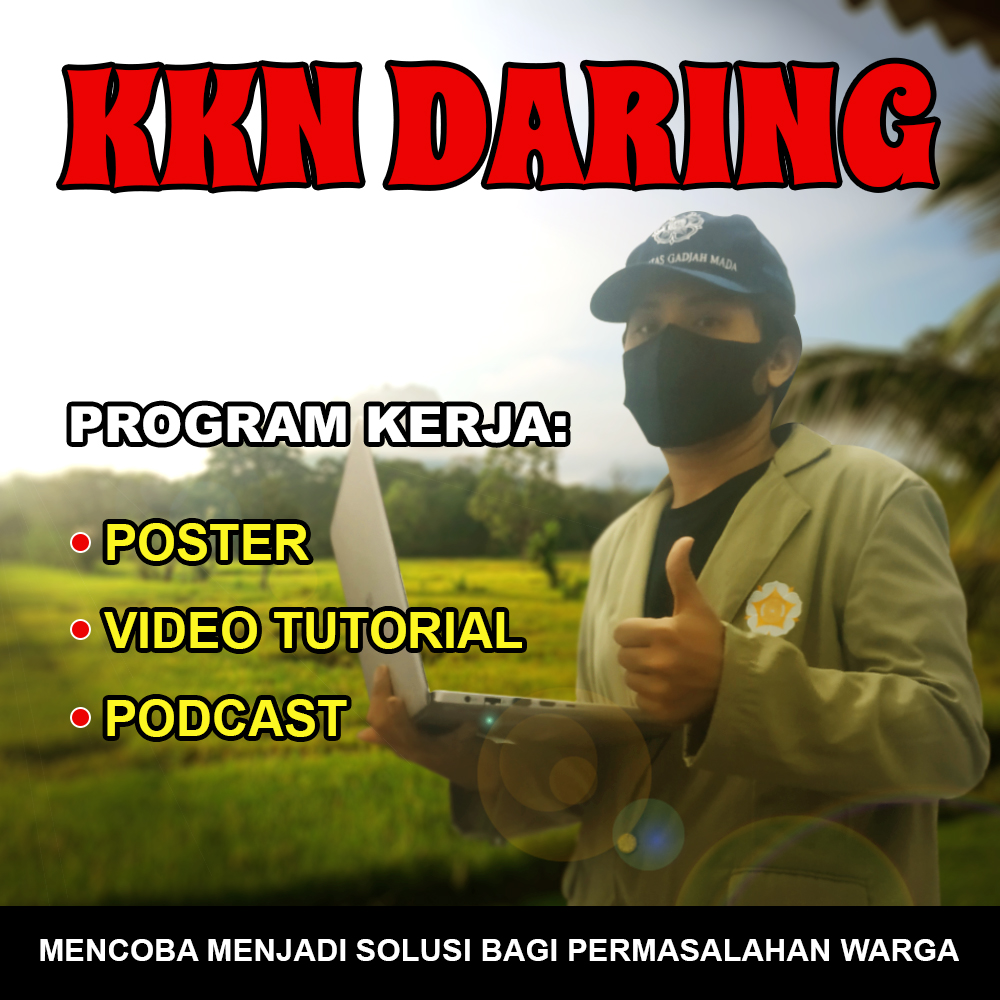 Kuliah Kerja Nyata – Program Pemberdayaan Masyarakat (KKN-PPM)/ Community Service – Community Empowerment Program by UGM second period held online as a preventive effort of COVID-19. KKN-PPM second period was involving 4.504 students from 19 faculties, guarding by 178 field supervisor lecturer and 15 region supervisors and apply 178 locations over Indonesia in 27 provinces, 77 districts/town, 143 sub-districts, and 263 villages. All mechanisms for implementing KKN-PPM are transferred to a particular system on the page periode2.kkn-ppm.id. Previously, UGM had also implemented KKN-PPM Period 6 as a quick response to the COVID-19 pandemic. In this paper, KKN-PPM Period 6 and 2 are referred to as KKN online.

The implementation shift of online KKN from “going directly to the location” to “through the house” created a distinct impression for the participants. Some prints arise, and the most striking of them are the lack of a sense of optimal service and the loss of the momentum of online KKN, which is closely related to direct work in the villages. Apart from the subjectivity of these impressions, there is some unrest felt by some online KKN participants. Departing from this, Balairung held an opinion poll on KKN PPM UGM students regarding the implementation of online KKN. Eighty-three online KKN participants filled this poll, both from Period 6 and Period 2.

Respondent data based on class

Respondent data based on KKN location

The opinion poll regarding the UGM KKN PPM Student Unrest in the implementation of Online KKN was distributed via Google Form for nine days with 83 respondents. Of the 83 respondents, the highest number of respondents from the social-humanities cluster was 66.3%, followed by the scientific group as much as 22.9%; agro cluster 6%; and medical cluster 22.9%. A total of 91.6% came from the 2017 class and 8.4% from the 2016 class; 94% of respondents carried out KKN in Period 2 and 6% in Period 6; Most respondents are located in KKN in the Special Region of Yogyakarta (43.4%), followed by Central Java (20.5%), East Java (10.8%), and the rest outside Java Island.

Online KKN requires participants to connect with villages remotely. Therefore, a device and the internet are needed. The assistance provided by UGM regarding this matter is still uneven; we can see it from the results of the opinion poll above. Most of the respondents (55.40%) did not receive credit or internet quota assistance. The distribution of insurance funds to which KKN participants are entitled is also not evenly distributed, with 54.20% of respondents not receiving insurance funds. There are still disparities in funding assistance for work programs, namely as many as 89.20% of respondents received work program funds, while 10.80% did not receive them.

The implementation of online KKN data based on UGM readiness

The implementation of online KKN data based on a technical view

As many as 92.8% of respondents said that UGM was not ready to implement Online KKN-PPM. 80.7% of the respondents also felt that the online KKN technique was complicated. Constraints experienced by most respondents shows that. The conditions most experienced by respondents were difficulty communicating with the village due to low signals and/or less enthusiastic village parties (86.5%). Then, followed by a maze of info on LRK filling and logbooks (78.30%); hard to determine the output of online KKN (71.1%); difficult to get contact with the village (59%); as well as less flexible working hour regulations (57.8%.)

An in-depth interview with an online KKN participant located in Morowali explained that communication with the village community was not optimal. The leading cause is low internet signal and connection. This problem impacts other implementations, such as work program outputs that are difficult to determine.

Based on that graph, as many as 45.8% of respondents did not know whether their program solved the village’s problems. This thing can be explained by the graph obstacles encountered in online KKN. Some respondents experienced difficulty communicating with the village so, to identify problems came from KKN participants’ assumptions. As a result, the preparation of work programs intended to help fix issues in the village is prone to be wrongly targeted.

As many as 39.80% of respondents said their work program did not provide solutions to the village’s problems. DPKM has canceled the 2nd-period KKN participants to go directly to the field, in contrast to the half-online period 6. Meanwhile, some village problems require real solutions instead of digital files such as posters, booklets, etc. But, of course, they cannot boldly undertake the real answer. So it is natural for respondents who feel they do not provide solutions to problems in the village.

Finally, 14.50% of respondents said their work program could provide solutions to problems in the village. The village feels helped by the KKN team’s work, and they fulfilled the achievement indicator.

However, the disparity between the number of respondents who chose “of course can provide a solution for the village” and the respondents who chose “no” and “don’t know” need attention to evaluated. KKN is a manifestation of the third point of the Tri Dharma of Higher Education, namely community service. So, the university can fulfill the third point if the community feels the dedication of students, which is a solution to society’s problems. The graph about The impact of KKN to the village is the axis of this poll that the online KKN system has not yet impacted the community.

Wish for the implementation of online KKN

Based on the graph above, 42.2% of respondents said that online KKN should not be held; then, 41% of respondents chose KKN to continue to be held but served it in their respective hometowns. The two options have a strong relationship. Online KKN does not need to be held because it is online (it cannot provide real solutions to the community), but SKS’s burden requires students to continue to carry out KKN. The alternative hope is that UGM will still hold KKN by going into the field and serving it in their respective hometowns. It makes more sense, has more impact on society, and of course, following the name KKN: Study-Real-Work (Kuliah-Kerja-Nyata)