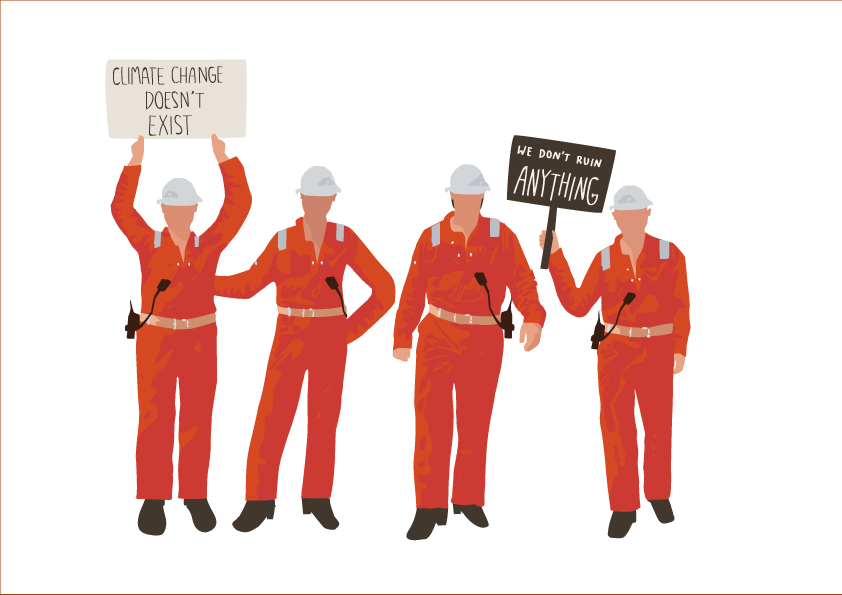 Research shows that the planet is warming. A brief history of building people’s belief of climate crisis is parallel with the efforts to obscure it. Industries have enough reasons and money to do so.

In December 2019, Time magazine announced Greta Thunberg as 2019 Time’s Person of the Year for successfully raising awareness on climate change. Through numerous campaigns, she became a role model for millions of people. Lately, Naomi Seibt also rose to fame with her new nickname “the anti-Greta activist” after expressing her opinion about the overrated concern on the climate crisis.

Seibt was present in the Conservative Political Action Conference/CPAC, which was also attended by Donald Trump. The Guardian mentioned that Seibt’s activities were funded by the Heartland Institute, a nongovernmental organization that distributed funds from the US government to climate denial activists. Heated debate on climate change provoked counterarguments like what Seibt expressed.

Research supported concerns about climate change. In 2016, NASA attributed the change in temperature, globally and specifically in Antarctica, to greenhouse gas/ GHG, in particular carbon dioxide. GHG traps solar heat in Earth’s atmosphere, causing the planet to warm as if it were confined in a greenhouse.

According to Weart (2011), climate change concerns have been a discussion since the 1930s. At that time, the US suffered from a mysterious drought. Guy Callendar, a British scientist, succeeded in compilating data and showcasing a 10% rise in global temperature. He argued that the significant increase might be due to GHG and that the earth might warm permanently.

In 1960, a young scientist Charles David Keeling exhibited a rise in the annual carbon dioxide rate due to fossil fuel. During the decade, people started to realize that the human population and the number of industries rose exponentially. Scientists predicted that, in 1999, the GHG rate in the atmosphere will bring monumental change to mankind.

Climate change-related social movements only emerged in the 1980s, in parallel with increasing discoveries on climate change. Threats to human lives started to become evident, with drought happening and sea levels rising.

In 1988, the UN established Intergovernmental Panel on Climate Change/IPCC which functions as a scientific climate change information provider to member states. In 1990, IPCC released its first report which affirmed that climate change was, indeed, occurring with causes still unknown.

IPCC reports inspired an environment activists meeting in 1990. The meeting resulted in a call for governments worldwide to enforce policies to tone down the causes of climate change. As a response, the first intergovernmental was held in 1992 to discuss said policies.

In 1997, IPCC released individual climate reports for each member state.  The reports were used as a basis to organize a UN conference in Kyoto, Japan the same year. The conference successfully produced the Kyoto Protocol which obliged 36 member states to reduce their rates.

From the targeted carbon dioxide reduction of 4.7%, member states successfully reduced 12.5% at the end of the first period (1990-2012). However, the reduction cannot be fully attributed to the member states’ efforts. The Soviet, Canada, and Ukraine break up in 1990 led to the decrease. Without the break up, the decrease will only account for 2.7%.

The public belief in climate change started to fade in 2009 due to the Climategate scandal and the minor error in IPCC 2010 report. The error was made on the claim that Himalayan glaciers will melt in 2035, contradictory to popular belief that they will melt in 2135. Another mistake was made on one of the percentage numbers in the report. The mistake tarnished IPCC’s credibility and eventually resulted in declining public trust. This was what climate denial groups utilized to their advantage.

Climate denial movements started their propaganda after the Soviet Union’s breakup. Public attention started to shift to environmental issues from communism and was amplified by the establishment of IPCC. Gradually, the issue started to become a concern for many parties, including industries.

The industry contributed to climate change through the emission of GHGs and support for climate denial (Grasso, 2019). In 2014, Richard Heede from Climate Accountability Institute did research to examine industries with the highest carbon emission in the world. He focused on 90 oil and concrete producers which contributed approximately two-third of aggregate global carbon dioxide and methane from 1986-2010. Even worse, 15.8% of the gasses were emitted by only 10 companies; topping the list were Chevron (USA), Exxon, and Saudi Aramco (Saudi Arabia) (Heede, 2014).

Besides GHG, big industries also take part in influencing public opinion on climate change. After being able to pinpoint GHG as a worsening factor for climate change, oil companies began to join climate denial movements to secure their operation. According to the Guardian, clinical psychologist Margaret Klein Salamon who established Climate Mobilization proclaimed that oil industries spent millions of dollars to tone down climate change controversy in the US. The attempt successfully encouraged public distrust. Even with the urgency of the matter, a country like the US refused to be involved in solving the problem due to industries’ domination in government policies.

Following the election of POTUS on 1 June 2017, Donald Trump delivered his speech on his plan to withdraw from the Paris Agreement. The Agreement binds countries to partake in the collective effort to keep global temperature rise at no more than 1.5oC compared to the pre-industrial era. He elaborated on how destructive the Agreement was to the economy by sabotaging workers and placing the country in a less strategic position vis-à-vis other countries.

Of 197 countries, ten didn’t participate, including Iran and Turkey. Iran’s oil company, the National Iranian Oil Company, took seventh place in terms of global GHG contribution (Heede, 2014). Meanwhile, the US has the first and second most polluting companies in the world. Said companies largely contribute to their countries’ economies. Quitting the Agreement freed them from the obligation to reduce emission, and therefore preserves their industries.

The industries’ role in denying climate change is evident. Following the discovery of GHG as the cause of climate change, several oil companies began joining the climate denial movement. They take part by funding conservative think tanks who support the movement directly (Dunlap & McCricht, 2011). Exxon Oil, for instance, gave 30 million USD to climate denial movements–like Tech Central Station, the Cato Institute, and Heritage Foundation—according to Greenpeace. The fund helped create the illusion that the movement is expansive and widespread (Washington & Cook, 2011).

Besides funding, oil companies—like DuPont, Ford, General Motors, Shell, Texaco, and Exxon— also established a coalition with the government. They succeeded in lobbying the US government not to ratify the Kyoto Protocol (Washington & Kyoto Protocol, 2011). As a result, the US quit the Kyoto Protocol in 2001 as announced by Christie Whitman, Administrator of the United States Agency.

Research by two scientists from Tyndall Centre for Climate Change Research, UK, revealed that commercials and visual promotions on climate change failed to motivate people to take concrete action. Simply illustrated, when forced to make the decision between taking action or die from climate change, the people tend to choose the latter (O’Neill & Nicholson-Cole, 2009). The research is useful to help us understand people’s lacking awareness of climate catastrophe.

The movement endeavored to spur doubt on climate change amongst the people, including through attacks on climate scientists, creating scientific arguments and influencing government policies. Climate change is such a complex phenomenon to be observed individually that research publications play such an important role in comprehending the concept (Jylha, 2018). Consequently, climate denial publications might be considered a reliable source (Dunlap & McCricht, 2011).

Washington and Cook (2011) reckoned that climate denial movements have 4 strategies to deny climate change: by making up conspiracy theories, supporting fake scientists, taking advantage of logical fallacies, and referring to climate research selectively. All of the strategies aim to convince the public that climate change is not scientifically proven.

One of the conspiracy theories created by climate deniers is Climategate. The scandal happened in 2009 when an email from the University of East Anglia scientists was hacked and published on the internet.  Through the email, climate denial activists tried to make it seem like the scientists were concealing facts about climate change.

Kevin Trenberth, an IPCC scientist, got his email hacked by climate deniers. They made it seem like Trenberth claimed scientists discreetly admitted climate change had stopped. In fact, the email discussed only temporal global temperature decrease amidst the long-running warming.

To give the movement more legitimacy and create an impression that scientists support the climate denial movement, climate deniers hired fake scientists. They utilized the petition proposed by the Oregon Institute of Science and Medicine/OISM in 2008. The petition was signed by 31,000 people who declared themselves scientists. These people, actually, graduated from computer science, zoology, pharmacy, and other majors which have nothing to do with the climate.

In order to build an argument, climate denial activists take advantage of logical fallacies; one of them was their claim that climate change once occurred in the past, making it a natural cycle that needs not be given special attention. This argument put aside the fact that the current temperature increase advances way faster than the earth’s natural cycle. Milankovitch cycles described the temperature increase cycle as an astronomic cycle like earth rotation and revolution. It can last 100,000 years and occur without human intervention. That said, it is undeniable that GHG does cause the climate crisis.

The truth of climate change is a wide consensus amongst scientists. However, a minority of them refused to believe it. A long history of the change cannot be separated from the role of industries, both from their environmentally harmful activities and social activities that influence public opinion. Major industries also proved to be funding various climate denial activities through think tanks. Other strategies include making up conspiracy theories, hiring false experts, using logical fallacies, and selectively quoting scientific research on climate change.

Weart, S. (2011). The Development of the Concept of Dangerous Anthropogenic Climate Change. The Oxford Handbook of Climate Change and Society.