Pos Teratas
The Dilemma of Informants’ Anonymity in Journalism
Polri’s Reform is Necessary, While the 2045 Vision...
Consumer Security and Privacy Threats in E-Commerce Data...
Religion and the High Level of Corruption in...
Student Movement is Timeless; Student Government, Meanwhile, is...
Afghan Women: Their Shackles and Concerns
Reducing Pollution Through Habitual Walking Lifestyle
Download IDM Crack 6.41 | 32-64 bit [2023]
The Absence of Law Enforcement in Handling Sexual...
A Brief History of Discourse on Animals in...
FeaturesNews

Voicing the Fate of Orangutans through Fine Arts 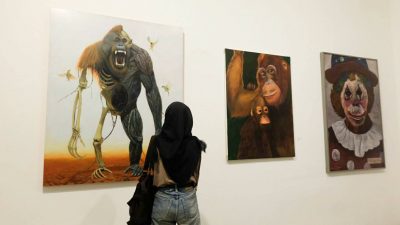 On that particular noon (17-02), the Jogja National Museum (JNM) was flooded with visitors. On the front yard of the exhibition entrance located in the south of JNM, visitors are seen taking selfies in a booth with orangutan images. Entering the exhibition, we can find news clippings about orangutan exploitation in Indonesia. There are hundreds of various paintings in a row depicting the current condition of orangutans on the living room wall. Apart from various paintings apart from painting varieties, you can find at least one or two orangutan statues in other several rooms. These works are artists’ contributions to an art exhibition entitled “Art for Orangutans 3: A Good Life for Orangutans”.

The exhibition, which was held from February 14-17, resulted from a collaboration between the Center for Orangutan Protection (COP) and the Giginyala arts community. COP is a non-profit orangutan rescue organization that operates in Kalimantan. COP is currently managing an orangutan rehabilitation center in Berau, East Kalimantan. Meanwhile, Giginyala is an art community in Yogyakarta founded in 2012.

Ramadhani L. Banjari, or familiarly called Dhani, COP Director, said that the exhibition was held to raise the issue of orangutan exploitation in Kalimantan. According to him, orangutans experienced many exploitations ranging from illegal trade, their habitat destructions, to deforestation for oil palm plantations. According to Aya Diandara, the speaker in the discussion “Art, Animal, and Activism” which is one part of the exhibition’s series of events, art can represent orangutans as voiceless subjects. “This exhibition was held because the artists wanted to give voice to orangutans who could not voice what they experienced,” said Aya.

In 2015, Giginyala invited COP to collaborate in organizing an art exhibition to throw the orangutan issue into a wider public. This then received a good response from COP, considering that previously COP only used written text form to provide information about orangutans. According to Dhani, the medium of text is considered less effective because the public’s interest in reading is meager. Therefore, in 2019, Giginyala and COP are once again holding an exhibition, having previously raised the theme “Life for Umbrella Species” in 2015 and “Refusing to Extend” in 2016. “Our society is accustomed to visual media rather than literacy, so it is more effective to use the medium fine arts or films to educate the public,” he said.

Responding to the artwork displayed, Dhani revealed that most of the orangutans’ expressions in this exhibition are depicted as sad. He added that the sad expression depicted was inspired by the results of independent research by artists regarding orangutans’ current condition. This expression is well described by Tri Hita Karana through her work entitled “Megaris”. In the painting, there is a human hugging an orangutan. The humans and orangutans were wrapped in trees and leaves. Behind them, a fire burns dry leaves, lighting up their background. The painting depicted orangutans as helpless and in need of human help from the threat of forest fires.

This is different from the work of Hedwig Dhana and Nabila Humaira, titled “You’re not the only one that lives here”. The work consists of six posters and chronologically tells the story of deforestation destroying the habitat of orangutans in Kalimantan. On the poster, orangutans are depicted as having to lose their homes due to land clearing for oil palm plantations. In addition, on one of the posters, the orangutan looks like humans have forcibly captured it and then detained it in iron bars. The orangutan in the poster appears to be isolated from its habitat.

“You’re not the only one that lives here” shows massive deforestation because oil palm plantations are a major factor in the decline of Kalimantan’s orangutan population. These factors are: conflicts with humankind, shrinking habitat, hunting activities, and habitat fragmentation. These all have led to the decline of nearly 150,000 orangutans in Kalimantan over the past 16 years. In addition, according to the journal Current Biology, the world is estimated to lose another 45,000 orangutans by 2050. This is a sad fact considering the closeness of orangutans and humankind in the genetic pole, orangutans are primates most closely related to humans. They have an essential role in forest regeneration. “Saving orangutans means we are saving human life,” said Dhani.

Meanwhile, Tata Wijaya wants to describe land clearing consequences by oil palm plantations through his work entitled “Forest Ghosts”. The work is made from pieces of used oil jerry cans, which are then arranged and constructed to resemble an orangutan’s body. The selection of used oil jerry cans itself implicitly shows a close relationship between the consequences of clearing land for oil palm plantations and the displacement of orangutan habitat. As reported in Tirto.id, the shrinking of orangutans is directly proportional to the forest area’s shrinking.

Dhani also revealed that the number of artists involved in the exhibition was 205 people with 232 works. Most of these artists come from within the country, but some participations are of foreign origin. Unlike previous years, Art for Orangutan seeks to reach a wider public through various series of events. This can be seen from the drawing and coloring competitions for children. “This event is not only intended for adults, but we also target children and adolescents,” he said.

Meanwhile, Anis Nur Rohmawati, one of the visitors who attended, deeply showed his appreciation to this exhibition. He said that the exhibition made him know about the exploitation of orangutans in Kalimantan. “Hopefully, in the future, more endangered species will be voiced through art,” he concluded.