Pos Teratas
Afghan Women: Their Shackles and Concerns
Reducing Pollution Through Habitual Walking Lifestyle
The Absence of Law Enforcement in Handling Sexual...
A Brief History of Discourse on Animals in...
ARTJOG: About Time, The Past Always Sold
Student’s Freedom of Speech Under The Shadow of...
Tracing The OGBV Cases Management During Pandemic in...
Student Demands amid the Unclearness of Gelanggang Mahasiwa...
World AIDS Day Commemoration: Discrimination and Social Stigma...
Hypnotherapy, Alternative Complementary Therapy to Support Mental Health
DiscoveryScience 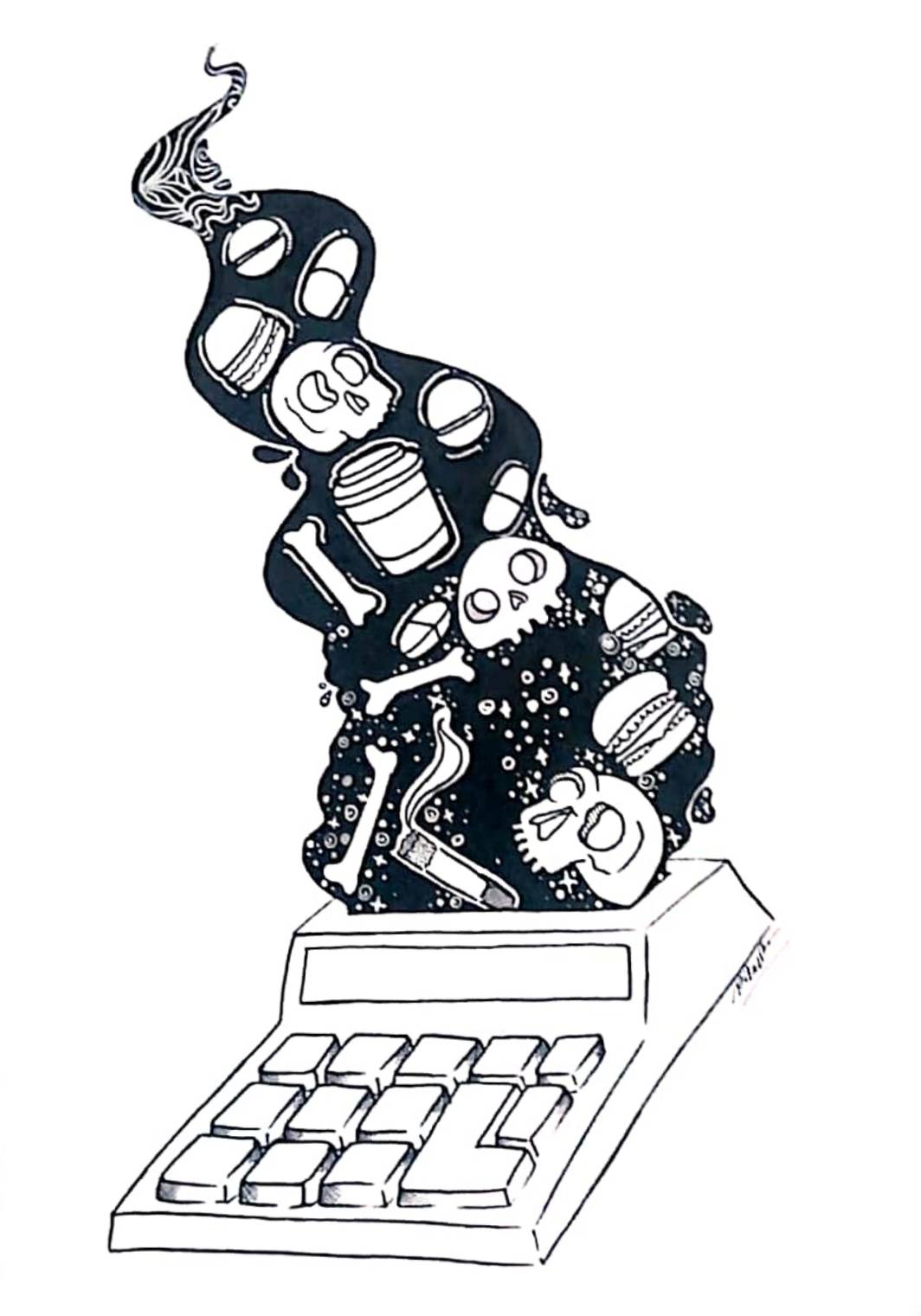 The record shows there are a high amount of active smokers in Indonesia. Data from the Strategic and Global Study of National Assurance Center of Universitas Indonesia shows that 33.03 percent of active smokers are 18-42 years old, 41.75 percent are 39 years old, and 44.75 percent aged 25-38 years being the most. This is not without reason, considering that cigarette prices in Indonesia are relatively low and affordable for the lower middle class.

It should also be noted that exposure to cigarette smoke has significant repercussions such as stroke, heart disease, hypertension, diabetes, cancer, and other diseases. It is this danger that can increase the country’s health burden. The National Health Insurance claims that in January 2017, heart disease uses most of the treatment budget with 6.9 trillion rupiahs, followed by cancer 1.8 trillion, and stroke 1.5 trillion. It is this danger that allows the government to create policies. As a country that has been plagued by smoking problems, the Philippines has implemented a sin tax as an alternative to breaking the deadlock.

A sin tax is a form of excise levied on goods or services that are deemed harmful to society. In modern economic terminology, a sin tax is a tax per unit imposed on providers of products, goods, and services that are harmful to society (Williams & Christ, 2009). the use of the word Sin Tax, etymologically speaking, means “sin” in its literal understanding, and “tax” is taxation. Examples of dangerous goods are cigarettes, liquor, added sugar drinks, and gambling. This tax has a significant influence on the country’s economy because the government will get additional taxes. The proceeds from this tax can be used to cover the consumption of dangerous goods. The positive effect of the sin tax also supports the government to be able to implement various programs, for example, socialization programs about the dangers of smoking, health programs, and others.

This sin tax is essential and has a profound effect on preventing unhealthy behavior. Not only in the context of health, but this tax also has the effect of covering the cost of income shortages. As a country that is successful in implementing this tax, the Philippines is a country that has additional income. Since the enactment of the sin tax, state finances have increased slightly from the previous year, and this money can be used for health programs. The results are satisfactory. The Ministry of Health budget has increased, and the budget for the poor has also increased.

The sin tax which was officially enacted in the United Arab Emirates (UAE)  on October 1, 2017, does not stop UAE citizens from smoking. According to a poll conducted by The National newspaper, shows that doubling the price of cigarettes does not cause them to quit smoking. The use of medaka, Arabic pipe cigarettes has only increased, which means that the UAE government will be overwhelmed with health problems because the dangers of pipe smoking are more considerable than ordinary cigarettes. A health expert said smoking a medaka once is equivalent to smoking four to five cigarettes, they also saw smokers had to be operated on because of smoking these cigarettes.

Other than these risks, many economists and policymakers disagree with this policy because of its regressive nature. In the context of tax policy, regressive nature indicates that a policy will burden people with low incomes. In full, the cigarette tax will feel larger relative total income for people with incomes ranging from 14 million and below, according to the World Bank as of July 1, 2018. Meanwhile, the opposite applies to those with an income of 54 to 169 million rupiahs. They will get a tax effect that is relatively smaller than their income, with the same level of consumption. The regressive nature of this sin tax arises because of the behavior of low-income in consuming the goods themselves.

Regressiveness arises due to a higher consumption pattern of sinful goods. Take cigarettes, for example, there is a consistency with the research that finds a positive relationship with levels of stress and mental pressure (Metcalfe et al., 2003). High stress among low-income people is usually due to two factors. The two factors are the environment and limitations due to poverty. This situation causes low-income people to suffer more and more due to the burden of their thoughts. To reduce the burden, they shift their consumption to “sin” items that are addictive and soothing. As a result, they will consume more of their sinful goods. This large consumption will cause the tax rate imposed on them to be relatively high compared to their income.

Hoffer argues that a tax on certain “sinful” goods burdens lower-income people more because they tend to consume these goods more often and more. The finding supports this statement that smoking can act to relieve stress due to social conditions (Vogli and Santinello, 2005). In addition, poor people also tend to prioritize habits without paying attention to the consequences, rather than prioritizing welfare and long-term goals (Haushofer and Fehr, 2014). All this leads to the fact that the sin tax is still regressive on low-income people because of their behavior.

In addition, the sin tax also tends to be seen as a form of excessive government restriction, which can be called paternalism. Reporting from the website of the Australian Parliament, the paternalistic nature arises because this tax restricts people’s freedom. This restriction is imposed by the government to protect its people from the unseen dangers of what is prohibited. However, is paternalistic nature always a problem in governing society? Paternalism remains a controversy because sometimes, they are mandatory, but some conditions prohibit paternalistic policies (Sankowski, 1985).

The majority of the existing literature tends to agree with the paternalistic nature of sin tax. The sin tax aims to limit the user in regulating the level of consumption through prices. The tax must be imposed because it is good for the health of users and those around them (Nielsen and Jensen, 2016). The consumption of sinful goods must be regulated because these activities can harm the user and those around them. For example, the user can get sick due to excessive cigarette consumption. Meanwhile, the people around the user will be exposed to an effect called an externality.

Paternalistic policies aim to prevent negative behavior and consequences in order to improve people’s welfare. However, policies that are paternalistic are not always good. Paternalism is seen as a basic violation of the liberal community – which assumes that every individual is rational (New, 1999). Although paternalism looks like the argument for supporting this policy, there is a possibility that this policy will be seen as a limitation for people’s choice in consuming an item.

Indonesia as Sin Tax Haven: Investigating the Validity of Cigarettes

Indonesia still has significant problems related to the number of smokers, both passive and active. In 2016, a survey by the Central Statistics Agency (BPS) showed that smokers tend to come from people in the lower-middle-income class. If traced by the second and third quintiles (income groups from low to high), the number of smokers in these categories reached 29.63 and 31.39 percent. The implication is that one in three low-income people in Indonesia smokes. The BPS survey also proves that smoking is a contributor to poverty both in urban and rural areas. In cities, cigarette consumption is in the second position in contributing to the poverty line, with a rate of 8.24 percent.

The disadvantage of smoking can also be examined in the Indonesian economy. Indonesia lost 597 trillion rupiahs in 2015 due to smoking activities. This total loss far offsets the state excise revenue from the same sector, which is around 139.5 trillion rupiahs. This loss is caused by a large amount of state spending for the treatment of diseases caused by smoking and losses arising from reduced productivity. On the other hand, in 2015, the state budget spent on cigarettes accounted for around 209 trillion rupiahs. Meanwhile, the amount of lost productivity in the same year is estimated at 374 trillion rupiahs. If allowed to do so, Indonesia’s economic growth performance may decline due to excessive cigarette consumption. Is this fact sufficient to implement a sin tax in Indonesia?

At first glance, the fact of regressiveness can be seen as an argument in favor of the sin tax, especially in cigarettes in Indonesia. The regressive condition can be an incentive for consumers to reduce cigarette consumption. The implications arising from this implementation are a reduction in cigarette consumption at the poverty line. However, is it true that social welfare will be better because of the implementation of a sin tax in Indonesia?

The reality is different. Even without smoking, poverty is still mushrooming in Indonesia. As reported by Katadata in 2017, Indonesia still has a total poverty line per capita for groceries at 294 thousand per month. Meanwhile, the total per capita poverty line for non-food items is recorded at 107 thousand per month. If a cigarette sin tax – which is classified under the poverty line in terms of food – were imposed in Indonesia, the tax would place a significant burden on the purchasing power of the poor. This decrease is due to the increase in cigarette prices, which will raise the standard poverty line in Indonesia. If the poverty line rises, people’s purchasing power will likely be burdened by an increase in the price of goods, without an increase in their income. As a result, people will again receive a burden in their household consumption.

This burden will only exacerbate inequality and social welfare in Indonesia. Cigarettes are addictive, and demands tend not to be influenced by price. As a result, a half-hearted increase in cigarette sin tax will only increase the burden on the poor to buy other basic goods. Although cigarettes contribute substantially to the poverty line, the regressive nature of the sin tax on cigarettes will result in a decrease in the purchasing power of society as a whole. The sin tax does look like a panacea for the welfare of the country. The drug can restore the country’s economy and public health. However, the medicine was still not perfect. There are still many problems and side effects that can arise from a sin tax application. Its regressive and restrictive nature can be an obstacle to administering the drug. It would be better if the drug were accompanied or replaced by other policies that can heal society from sinful goods. Also, we must see the state as a trial patient of the sin tax. This check is imperative so that there are no dangerous side effects that can arise from the implementation of the tax.