Without Agenda and Movement, Should the Student Parties be Maintained? 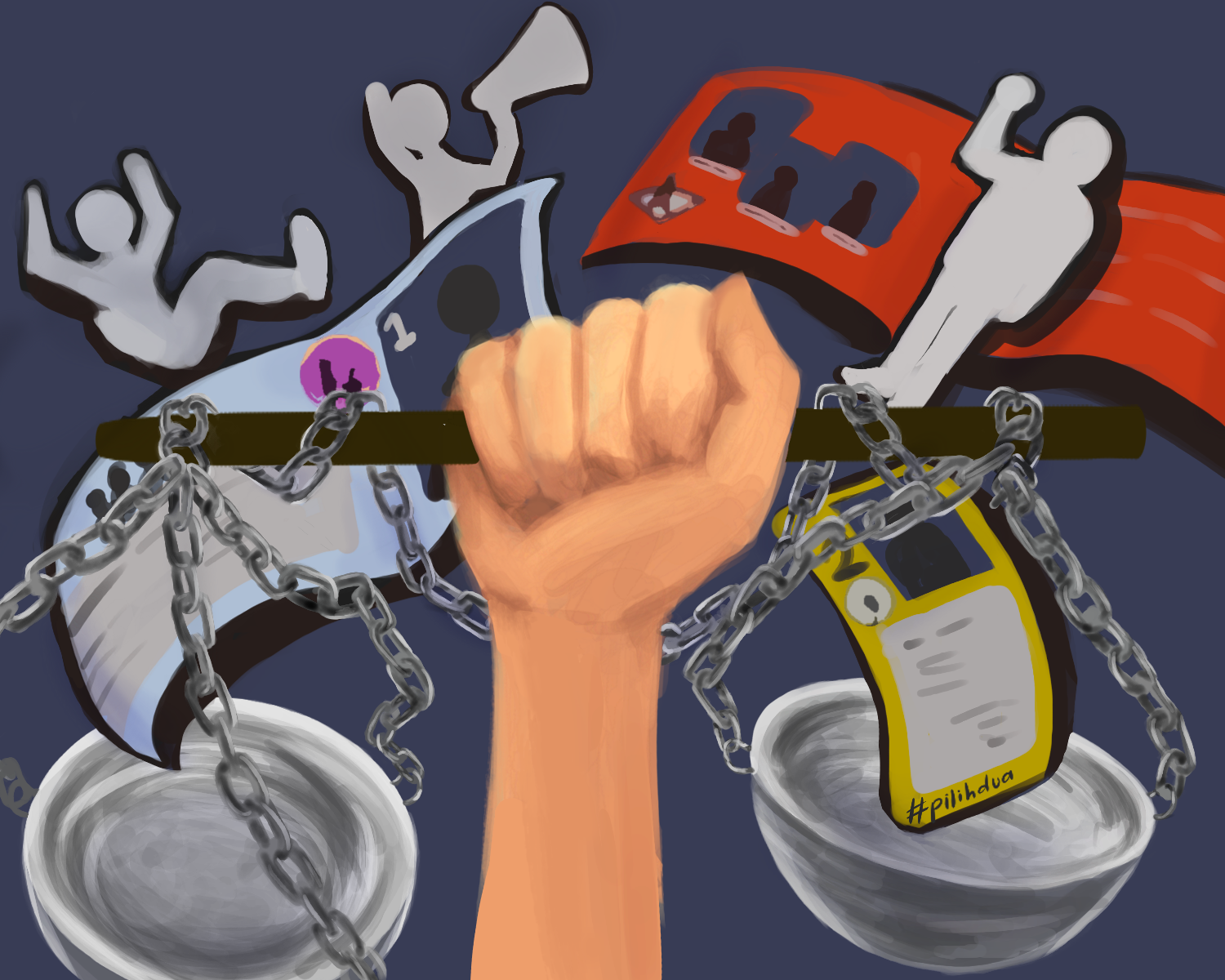 Born from critics toward the national parties, ironically, the student party resembles the entity they used to criticize. The clarity of the student party has been questionable, starting from the ideology until its role in student movements. All of these make the student parties come to the crossroads: reorganize or disband.

High tension debates were continuously happening throughout the day, lasting for four to five days. The opposition sides were particularly contrasting on whether to disperse or give another chance to the KM UGM concept. It also included a discourse about the dispersion of the student parties that was part of the system. That was the atmosphere of the KM UGM congress in 2016 as Vicky, the 2013 alumni of faculty of law, recalled from his memory.

According to Vicky, the debate was full of overflowing ideas. Moreover, there were also fractions within the group which supported the dispersion of parties holding the opposite ideas. Some of those fractions desired the disbandment of the student party, while the others were reformists who remained encouraging the student parties. “I was a reformist before, but then I leaned toward the radical side after failing to find the answer about why the student party needed to be maintained,” he said.

According to Vicky’s story, the congress settlement made the reformist mature enough to appreciate five thousand votes from the Student General Election (Pemilwa). It was acknowledged by the whole congress participants with one condition, the student party has to get organized. However, as interviewed on 26 October 2020,Vicky stated that the working model of the student party these days remains disappointing. Hitherto, he thought that the student party did not have a significantly essential role neither for student movements nor the well-being of the student itself.

The Background of the Establishment of Student Party

According to Article 1 Section 1 UU KM UGM No. 4 of 2020, student party is an organization formed voluntarily by a group of students that share similar aspirations to fight for interests of the members and students, through student representative election. Iqbal Nurrahim, chairman of the Partai Bunderan UGM 2020, thought that the appearance of the student party in UGM was driven by the expression of student’s critics toward the national party in Indonesia. He added, Partai Bunderan UGM which was established in 1998, was built based on critics of the political climate which repressed the freedom to form a party. “At that time, there were only three parties, PDIP, Golkar, and PPP,” Iqbal said.

Different from Iqbal, Nusi as the Chairman of Partai Srikandi 2020, claimed that the student party were identical to miniatur of the national parties seen from coalition maneuver.  Nusi considered Partai Srikandi smaller than the other student party in UGM yet Partai Srikandi made the coalitions become necessary to gain representation in the campus political system. “Coalitions are one of the strategies to gain the minister chair,” Nusi said.

Muhammad Hikari Ersada, Coordinating Minister of BEM KM UGM 2019, also agreed that the ideology on most of the student party are unclear. He argued that the unclearness of ideology had blurred the distinction between the student parties and national parties. According to him, the working model of a party in such a way would only become a tool of power, not a medium to criticize that power. .

In addition to that, Elemental Senate of Faculty of FK-KMK on MPM-KM UGM added that the representatives of the party on MPM-KM lacked evident objectives and ideology, therefore, the student party was impressed as to get power. “Student parties were used as a tool to get power on MPM-KM,” she said.

Hence, the appearance of the student parties as a critique of the national parties seems like a paradox and irony at this time. This matter was also revealed by Luthfi Hamzah Husein, chairman of Student Executive Board UGM 2011. “If parties nowadays are short of a definite agenda and ideology, what makes them any different from the national party that they used to criticize?” he said.

But, Hikari’s projection was not fully aligned to Iqbal’s confession. When he was asked about the manifestation of Partai Bunderan’s ideology on their concrete agenda at formal structure of KM UGM, Iqbal explained that political struggle of Partai Bunderan was still limited in guaranteeing the representation of cadres in UGM. “As long as there was party cadres representation, it means that the party’s value would be fought for,” he said.

In other hand, Nusi claimed that even though Srikandi had a specific ideology, feminism, Nusi acknowledged that her party still lacked a formal agenda on either MPM KM or BEM KM to fight for their ideas. The most obvious maneuver of Srikandi, she added, was to propose chairman candidates and their senate who had insight on gender justice. “This will certainly have an effect on mainstreaming feminism values in the KM UGM structures,” said she.

Satria Umbu, Chairman of The Communication Forum of Student Club (UKM) of 2020, explained that bigger troubles would present from student parties that had no concrete agenda. According to him, the student parties should produce a clear agenda due to its significance to student representation in UGM. “If so, what is the basis to get a true presidential candidate?” asked him.

To answer that statement, Luthfi showed his regret that the notion of learning media became an excuse to justify the sustainability of the student party. Luthfi evaluated the student party as an unhealthy tool for political learning since it was institutionalized money politics. “It was when I easily opened the recruitment of ministers when I realized it,” stated the Chairman of Student Executive Board, which proceeds independently, said.

Umbu said that once student parties have a willingness to learn politics and apply their concrete agenda, it would implicate moral problems. He also said that in October 2018, Future Leader Party (FLP) published a grand theme concerning the difabel group. The concern that was only published a month before the student representative election was criticized by UKM Peduli Difabel. Umbu said that UKM Peduli Difabel thought that FLP used the concern as a tool to get votes. “The intention is good, but do not use it as a tool for fulfilling party interests. Moreover, they used to ignore our difabel members, and now they turn their concern to another issue,” Umbu, also a member of Anggota UKM Peduli Difabel, criticized.

As an organization whose goal is to fight for student’s interests, student parties also claim that they are involved in various movements. Alghiffari, who claimed this statement, said that his party functioned as a movement through cadres’ role in various collective groups and student institutions. “When our cadres get down to the street, they represent our party names,” said him

Vicky denied that claim. He assumed that the cadres’ initiative did not reflect the attitude and works of the student parties. According to his explanation, the student parties were not institutionally involved in the movement. As for him, the student party was not involved in Gejayan Memanggil 2019 until the Omnibus Law 2020 protest. “Parties also do not contribute to the May 2nd 2016 act that brought out UGM internal issues,” he said.

Vicky stated that the existence of the student parties made the movement become sluggish, instead of being the initiator. According to him, student parties were busy with the campus politics problems, such as Pemilwa that demanded focus and big resources. “This political procedure blurs the focus of the student to move,” regret her.

It contradicted what Abdul Ghaffar, lecturer from Department of Politics and Government UGM, said that procedural democracy symptoms must be avoided. He explained, symptoms that showed by people’s business on democratic procedures have already infected national politics and the world. “Students should not get trapped, they have to focus on the core of substantial democracy which mainly supervises the issue,” he added.

The idea of UGM without student party was affirmed as well by Ina. She said that her presence was not necessarily significant in affecting MPM KM. Along with her journey with MPM KM, Ina did not see the student party’s role institutionally. According to Ina, it would not be a problem if the student party was removed, because the representativeness between the student party senate on MPM and the faculty senate overlapped. “If the senate from the party also fought for student issues, then what differentiate them both?” Ina said.

On a different context, Maheswara also claimed that the student party did not have a significant role in building political college animo. He said that students should not make a group on a party basis, but on a common issues and concerns basis. According to Maheswara, that idea would make the contest of student politics that brings participatory and interesting issues coming up. “Even though participation rate for Pemilwa increased annually, the number never reached 50 percent of total students,” Maheswara said.

Umbu stated, if there are students that depend on the student party, it would become necessary for them to strive for the clarity of their students on UGM organization structure. In order to achieve that, Umbu pointed out that the student party should have a similar agenda that was decided by Ditmawa. “They have to make themselves clear, so their purpose is not getting questioned continuously,” Umbu added.

Abdul Ghaffar, who did not problematize the existence of the student party, said the same thing. According to him, the most important thing is how students can implement substantive democracy’, instead of procedural. “The ideal student party is when they still become a motor for student movement,” he revealed.

Different from Hikari and Abdul Ghaffar, Vicky asserts that he denies this party system. He argues that the party inside the system is limited to the initiative to build a movement. Vicky addresses national parties that have a tendency to play it safe because of their business in electability. “Student parties are included. If they could not contribute to the student movement, then what is it for?” he asked.