Pos Teratas
Student Movement is Timeless; Student Government, Meanwhile, is...
Afghan Women: Their Shackles and Concerns
Reducing Pollution Through Habitual Walking Lifestyle
The Absence of Law Enforcement in Handling Sexual...
A Brief History of Discourse on Animals in...
ARTJOG: About Time, The Past Always Sold
Student’s Freedom of Speech Under The Shadow of...
Tracing The OGBV Cases Management During Pandemic in...
Student Demands amid the Unclearness of Gelanggang Mahasiwa...
World AIDS Day Commemoration: Discrimination and Social Stigma...
Features 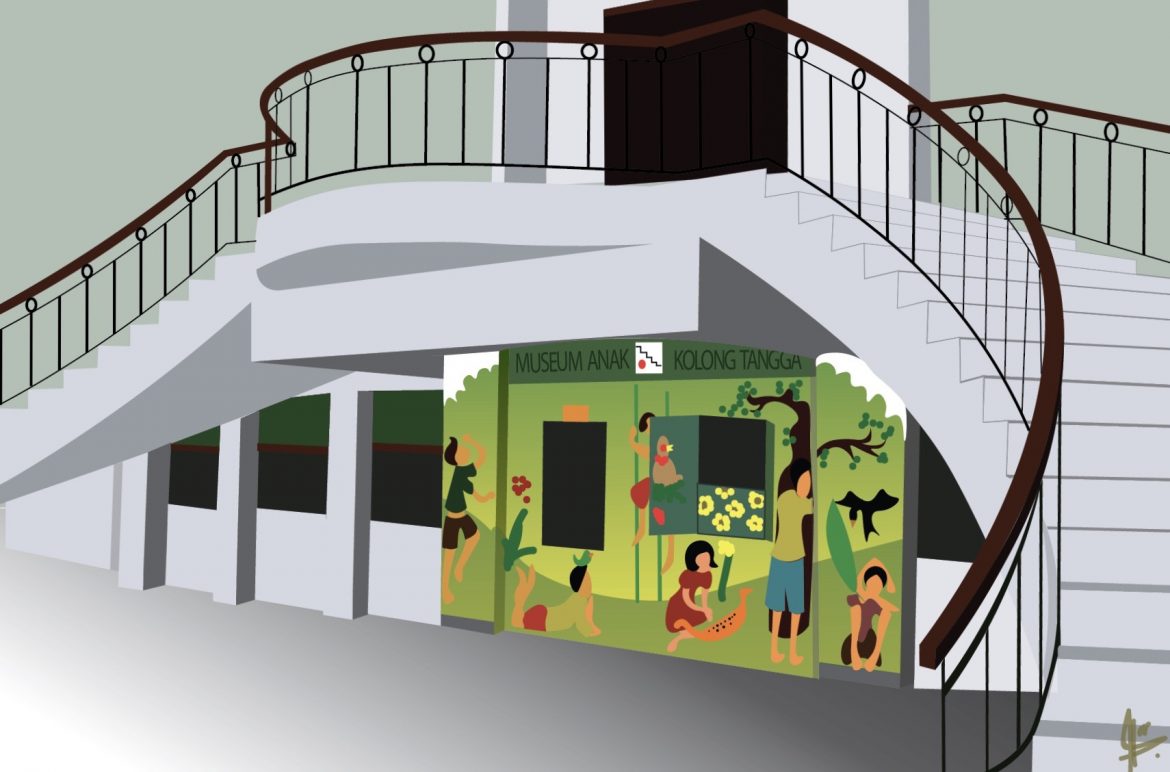 Tak…tak…tak… four slats of bamboos were moved transversely on the ground. The bamboos were moved rhythmically with an accompaniment of the “Potong Bebek Angsa” song. A child was seen jumping in the middle, tried to elude the bamboos so as his foot will not be squeezed. Occasionally, an echo of happiness and children’s laughter heard amongst the song. With bare feet, the children tucked up their sleeves. Outwardly, a game that came from the Philippines called Tinikling, was played full of energy. 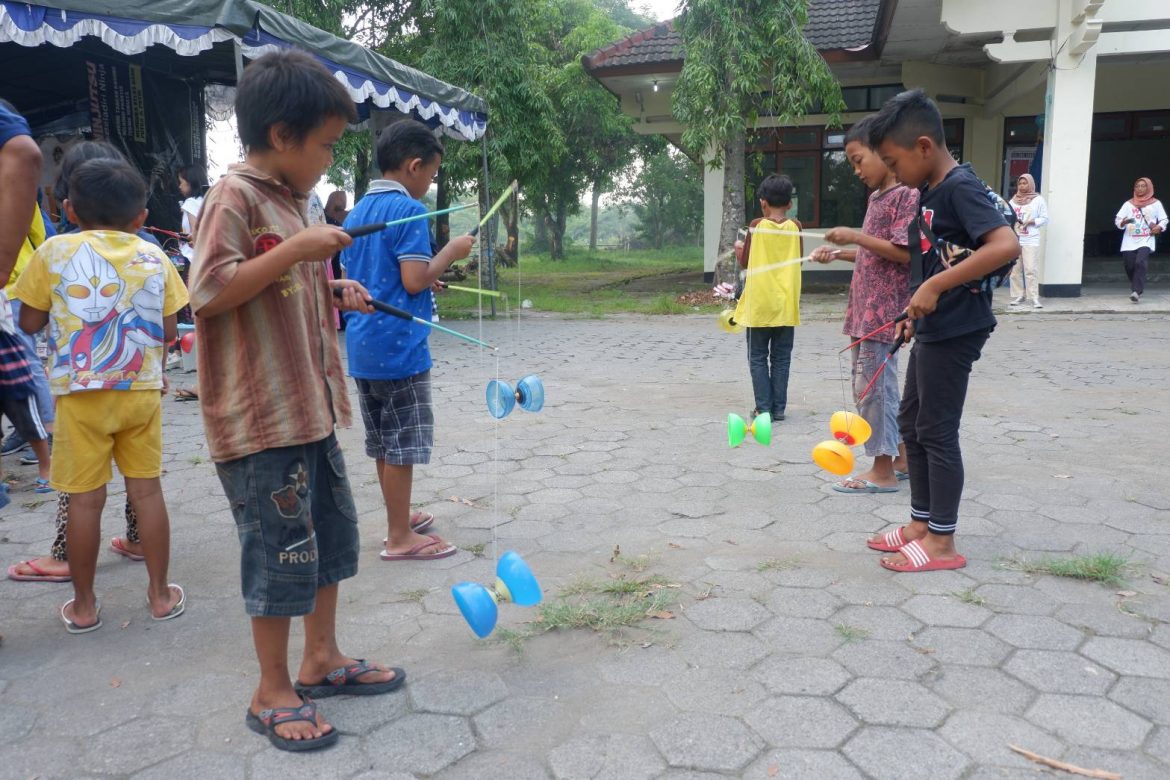 Not only Tinikling but there were also other traditional games from other countries been part of this festival series. This festival held by Museum Pendidikan dan Mainan Kolong Tangga. This festival called We Care We Play: Ayo Main Keliling was an alternative effort for educative entertainment. No wonder, on Sunday (15-03), at Bumi Perkemahan Babarsari, Sleman fulfilled by children. Aliyah Sekar Ayu, project officer, said that they try to promote varied traditional games internationally to the children. “Game is a universal thing that had educative value inside it,” said the woman, chummy called Echa.

After being satisfied after playing, a group of children ran to the near building from their place. A room 10 x 10 m transformed into an exhibition room. The room divided into two parts, the north, and the south. The north part, a mini display of museum collections. The wall and show window well-lined by photos and foreign traditional game objects. Several traditional game objects can be played by the visitors such as congklak, bekel, and, gasing can be found. 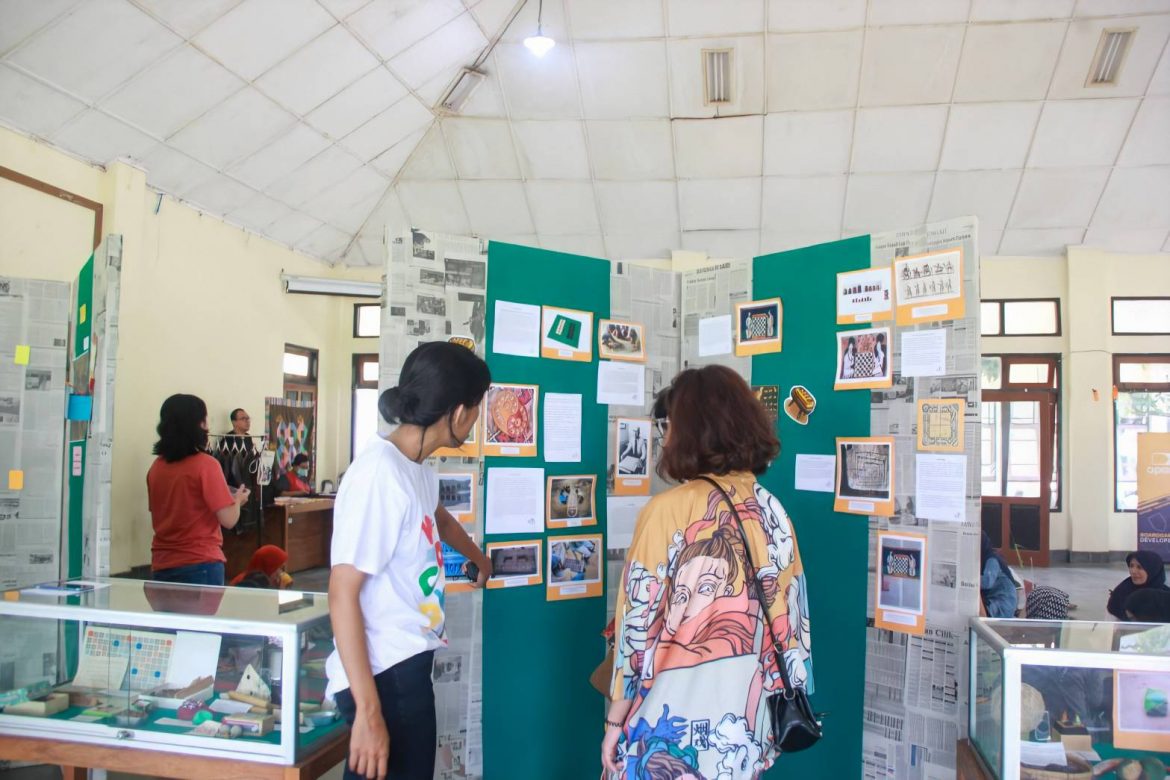 The south part of the room fulfilled by various workshop such as how to make Worry Doll, a small doll that believed it cans disappear concerns if we put under the pillow before bedtime. There was another workshop, how to craft things made by janur. “The concept of this festival, it represented the real museum under the hollow,” said Echa.

One of the volunteers who is also a public relations officer for the museum, Redy Kuswanto, told us the beginning of the establishment of the Museum Pendidikan dan Mainan Kolong Tangga (Education and Under the Hollow Toy Museum). Occupying an empty space under the stairs of Taman Budaya Yogyakarta (Yogyakarta Cultural Park) 2nd-floor Concert Hall, the Museum Pendidikan dan Mainan Kolong Tangga was officially opened on February 2nd, 2008. However, long before that, a community consisting of a group of artists from Yogyakarta had formed. “Even during the 2006 earthquake, we volunteered to heal the trauma of children that affected by disasters,” said Redy. Continuing with the same mission that focuses on children, and is supported by a collection of traditional foreign toys, and finally, the artists who work in this community agreed to establish a museum.

We met Redy at the residence of the initiator of the Museum Pendidikan dan Mainan Kolong Tangga, Rudi Corens. Since he came to Indonesia in 1990, a Belgian has completely chosen to stay in Yogyakarta. Unaccompanied by his family, Rudi lives alone in his house. A room with an open door shows a chubby but steady man sleeping soundly on the bed. With an open body without a t-shirt, there were wrinkles that adorn his white skin a little. Already in the past year, the illness he suffered made his days spent only on the bed. Redy and several museum volunteers helped him to fulfill his food and other needs.

In the living room of Rudi’s residence, Balairung and Redy chatted with an effort not to disturb the initiator’s rest. With his red t-shirt and casual knee-length pants, Redy, who from the beginning joined as a volunteer, shares his story about the museum further. The Museum Pendidikan dan Mainan Kolong Tangga houses volunteers in three divisions, namely workshop, Majalah Kelereng (magazine), and a library called Burung Biru. “But in the end, all volunteers are capable and empowered in all existing divisions,” he said.

“We are here to provide education outside the school curriculum by honing children’s potential,” added Redy. He claimed to have conducted research related to the formal education system in Indonesia. From the results of his research, it was found that the concept of formal education in Indonesia sometimes tends to be burdensome for children. Hence, they seek to provide alternative education for children to be able to think critically, through two-way interactions between volunteers and children. “Children are not only fed in black and white,” said Redy.

This then prompted Duhita Anindita Pramastuti, who comes from Jakarta, to invite her child to visit the Museum Pendidikan dan Mainan Kolong Tangga while on vacation in Yogyakarta. The 6-year-old boy asked various questions about the museum collection. Duhita shared how enthusiastic her child was when she saw traditional and foreign games that had never been seen before. “Oh, it turns out that simple tools can become funny toys,” said Duhita trying to imitate her stunned child.

“Children need to know that being happy actually is simple,” she added. According to Duhita, children don’t need expensive devices just to play fun things. For her, the process of interacting with other people when playing is where the excitement of traditional games lies. Duhita also added that the philosophy of the story of making traditional games is an alternative to provide moral education for children.

In spite of nine years of existence, the Museum Pendidikan dan Mainan Kolong Tangga lost its place to live. As of July 2017, they can no longer occupy the space under the stairs of the Taman Budaya Yogyakarta Concert Hall. From Redy’s confession, they were initially asked to move on the grounds of renovation. However, until the second the renovation was finished, they were not asked to return. This is related to the change of ascendancy of Taman Budaya. “We understand because changing chief means different policies,” said Redy.

The opportunity to occupy the empty space under the space was given based on the kindness of the previous Taman Budaya chief, Dian Anggraini. Dian’s kindness is also due to her participation as one of the founders of the Museum Pendidikan dan Mainan Kolong Tangga with Rudi. “Since Mrs. Dian is no longer the chief, we feel that we don’t have a protector at Taman Budaya,” explained Redy.

Regarding the allegation that the volunteers did not prepare for their closure from Taman Budaya, Redy firmly denied this. He said the museum volunteers realized that they would not stay in Taman Budaya forever and needed a new place to live. Various requests for assistance and rental places were distributed by volunteers of Museum Pendidikan dan Maianan Kolong Tangga. “We have contacted many sponsors and agencies, including the Badan Aset Daerah (Regional Asset Agency) and kelurahan (sub-district), but no one has responded,” he said.

In line with Redy, Echa added, now they have to spend a large amount of money to buy a new building to exhibit 20,000 museum collections. Until now, the requests for assistance they have offered to government and private agencies have been rejected. The reason is that the recognition of their existence as a museum collides with the Republic of Indonesia Government Regulation Number. 66 of 2015 on museums. Article 3 in the regulation says that the museum must have assets in the form of a building. “Well, we, who don’t have this building, finally can’t get help,” complained Echa.

In response to this, Asroni, general secretary of the Badan Musyawarah Musea (Barahmus) DIY, said that basically, the museum must have a permanent position in accordance with the government regulation. Asroni admitted that the issue of permanent position is the full responsibility of the museum. “We can only help support and hold activities with museums in DIY,” he said.

Now, after getting tired of looking for help, museum volunteers are seeking all forms of fundraising independently. Bazaar activities, procurement of donation boxes in several public places, and donation platforms are the way chosen by museum volunteers. In addition, Redy said that all activities in the Museum Pendidikan dan Mainan Kolong Tangga division are still being carried out regularly. “Museum without a building does not mean dead, we are still there,” he concluded.

They believe that the concept brought by the Museum Pendidikan dan Mainan Kolong Tangga is the only one in Yogyakarta. That is a reason not to give up on maintaining this museum. Redy added the massive use of technology in children was accompanied by a negative impact on children as well. He thought technology makes children physically immobile, limited thinking space, and a tendency to become irritable and less empathetic. “In this sophisticated age, our museum is still needed, right?” Redy asked convincingly.