Traditional Tattoo Value Distortion in the Trend of Neotribalism Style 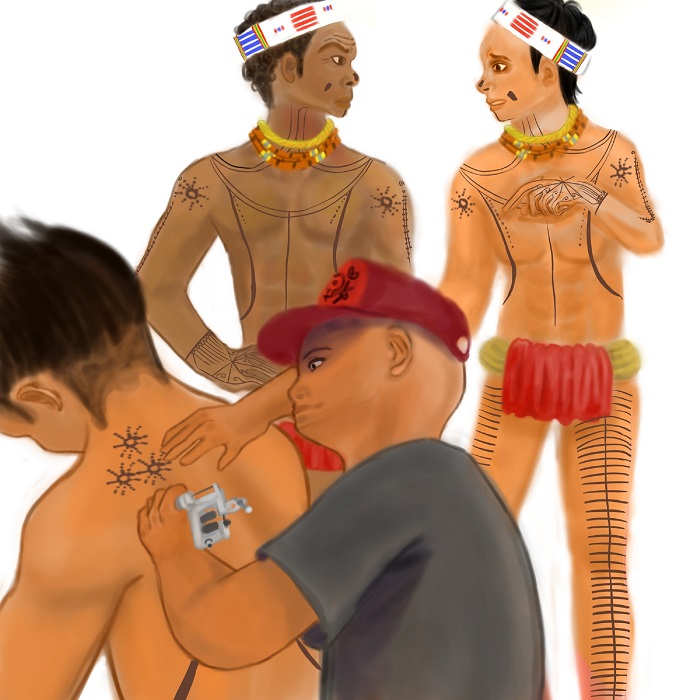 Toxic, an identical word to bullying could encourage the establishment of Tatoo Studio in Bangunjiwo Sejahtera Street, Kasihan, Bantul, Yogyakarta. Munir, the founder, explained that he selected toxic as the studio’s name came from a context behind it. The toxic tattoo was established in June 2000 after the fall of Soeharto’s regime. Who could expect Munir and his roommate to develop the studio recklessly? It is a reasonable argument from Hatib Abdul Kadir Ollong, the author of Tato, that Toxic Tattoo was born with bullying.

At a glance of Toxic Tattoo studio, it adopts the eco-house architecture concept within the outdoor nuance. Inside the studio, there are showcases in a row for storing equipment, such as needles, ink bottles, coil machines, and hygiene kits. The collections are not limited to the matter of aesthetic decoration, but also selling.

Accompanied by two cups of tea, Balairung had a warm interview with Munir. According to this alumnus of The Design of Visual Communication, the Institute of The Arts Yogyakarta, Tattoo means creativity and the means of self-expression from the inner human body. He stated that the suggestion could not separate human beings in their life. “A tattoo is a form of suggestion that expresses such hopes to give a life balance,” he said.

Determined by such purpose, Toxic Tattoo does not provide any specific design. It preferably provides the customer’s request. Hence the result is often trendy and following the current style; likewise, today, tattoo aims to generate a modern contemporary design. According to Munir, the chosen modern tattoo has a specific philosophical meaning that could express someone’s self-image.

The design that contains clear lines refer to traditional tattoo design from one indigenous culture nowadays has become popular. Such design gathers in the style of neotribalism tattoo. There are two reasons why the type becomes popular in urban society. Firstly, it must not practice any ritual ceremony. Compared with any indigenous way of life, for gaining a tattoo, someone has to pass specific levels in life. For example, Dayak women that used to weave will have a tattoo on their wrist, on their leg if they have got married, and on their face for a warlords’ wife. Secondly, it contains individual anatomy or follows body contours.

Neotribalism historically appeared by the surfeit of the Western people in the matter of expressing themselves. Then they tried to design a unique and new tattoo, free from any traditional inhibition. In summary, neotribalism rapidly grew in the US in the 1970s. It is marked with the establishment of the Celtic Tattoos studio, offering a unique tribal design by Louis Johnson. The studio was crowded and became popular, so that was posted in the tattoo magazine, Tattoo Time, and got the inspiration for punkers. Its golden age is marked by other tattoo designers, such as Cliff Raven, Dan Thome, Roger Ingertoon, Michael Malone, Lao Brereton, and Kandi Everett, known as the king of tribal tattoo that day. It is then followed by some actors like Dwayne Johnson with Samoan and Aquaman tribal tattoo on the half of his left arm, and Jason Momoa has a tattoo on his arm with the Hawaiian tribal design. It causes neotribalism to become more popular abroad.

The traditional tattoo has various functions in its use, such as jewelry, medicine, and self-identity. Yasir, who lives in Central Kalimantan that close to Dayak tattoo culture, said that Bunga Terung for Dayak Iban describes life journey, cultural identity, and status of maturity. Other functions of traditional tattoo present in Mentawai. For them, a tattoo is an accolade to someone with specific social status, for instance, the Sikerei—Mentawai traditional medical expert—known by the motive of Bintang Sibalu-balu in his body. Still, the traditional tattoo also functions as the celebrations of the human life cycle, such as birth, puberty, marriage, and others. Such functions can be seen in the Mentawai ceremony Arat Sabulungan. According to Hatib’s book Tato, Arat Sabulungan is a Mentawai’s belief to set the position of the tattoo. The 11—12 years old boys will get the tattoo on their upper arm. At the same time, the 18—19 years old men will get the tattoo on their chest, thigh, leg, stomach, and brisket. Meanwhile, Dayak women have their tattoo when they are 16 years old or get their first menstruation.

However, as the current development, the traditional tattoo has not been fully used in the utilization terms above. Nowadays, people have a traditional tattoo in rare. Yasir explained that in Central Kalimantan, there is a limited individual who wants to have a Dayak traditional tattoo on his body. The leading cause for such matters is modernism, Abrahamic values, state bureaucracy complicating tattooed individuals to get a job, and people’s stigma on the tattoo. He also stated that some people interested in traditional tattoos do not come from the natives but foreigners. “At least there are some people who want to esteem traditional tattoo culture by having it on their body,” he said. For such reason, he argued that it is a sign for Indonesian to looking back at their cultures.

The renouncement of tribal art from indigenous people should be a concern. Reflecting on some documentaries such as “Mentawai Tattoo Revival” framing the life of the Mentawai people and Yasir’s argument, people who have tattoos within its roles and social functions become less. It brings out a question, is still the traditional tattoo needed to preserve in this time?

According to Hatib, people should not see indigenous people as an iron that cannot change and anti-modernity. Some indigenous people have a curiosity to follow modern trends. It also applied to the matter of the art of tattoo. “If we give them attention, the indigenous people instead unconsciously aware and care for their loss of tattoo in their culture. It is because they also an obsession through modernity itself,” he explained.

What is happening today is there is a value distortion in the tattoo itself, specifically for the traditional tattoo. “When the tattoo culture in tribal society does not appear anymore, if we see structurally, it is a sign for losing any other culture,” Hatib explained. Therefore he saw that what is worth to be preserved is their ceremony of maturity and marriage. When the tradition has lost, people do not know when they have got maturity. For Hatib, if the function of tattoo as maturity status has lost, it also deprives the essence of the tattoo.

Affirming Hatib’s argument, Yasir expressed his concern. He complains of the foreigners and urban society for their attitude having the Daya tattoo only by the aesthetic sense but no understanding of the philosophical matters behind the design. Complacenting by the neotribalism trend, they progressively want to add some tribal tattoos in their body but not locating the design on precision. “Why do they modify Daya tattoo on their own? Can not they spear their time just for two days to learn? Does it make sense Bunga Terung placed on the elbow? How ironic it is,” Yasir criticized.

Yasir also cannot resist the existence of the commercial tattoo. He does not want to take it for granted, modifying traditional tattoos to place them in the marketplace. “It is not a serious problem anymore; they also need money,” he added. Nevertheless, he stressed for the people and tattoo enthusiasts to learn the culture of traditional tattoo for understanding and respecting it. If they want the market demand and the aesthetic matters only, it must be no longer for traditional tattoo living to exist. Not only the existence of the tattoo itself but also the ritual.