Pos Teratas
The Dilemma of Informants’ Anonymity in Journalism
Polri’s Reform is Necessary, While the 2045 Vision...
Consumer Security and Privacy Threats in E-Commerce Data...
Religion and the High Level of Corruption in...
Student Movement is Timeless; Student Government, Meanwhile, is...
Afghan Women: Their Shackles and Concerns
Reducing Pollution Through Habitual Walking Lifestyle
Download IDM Crack 6.41 | 32-64 bit [2023]
The Absence of Law Enforcement in Handling Sexual...
A Brief History of Discourse on Animals in...
Features 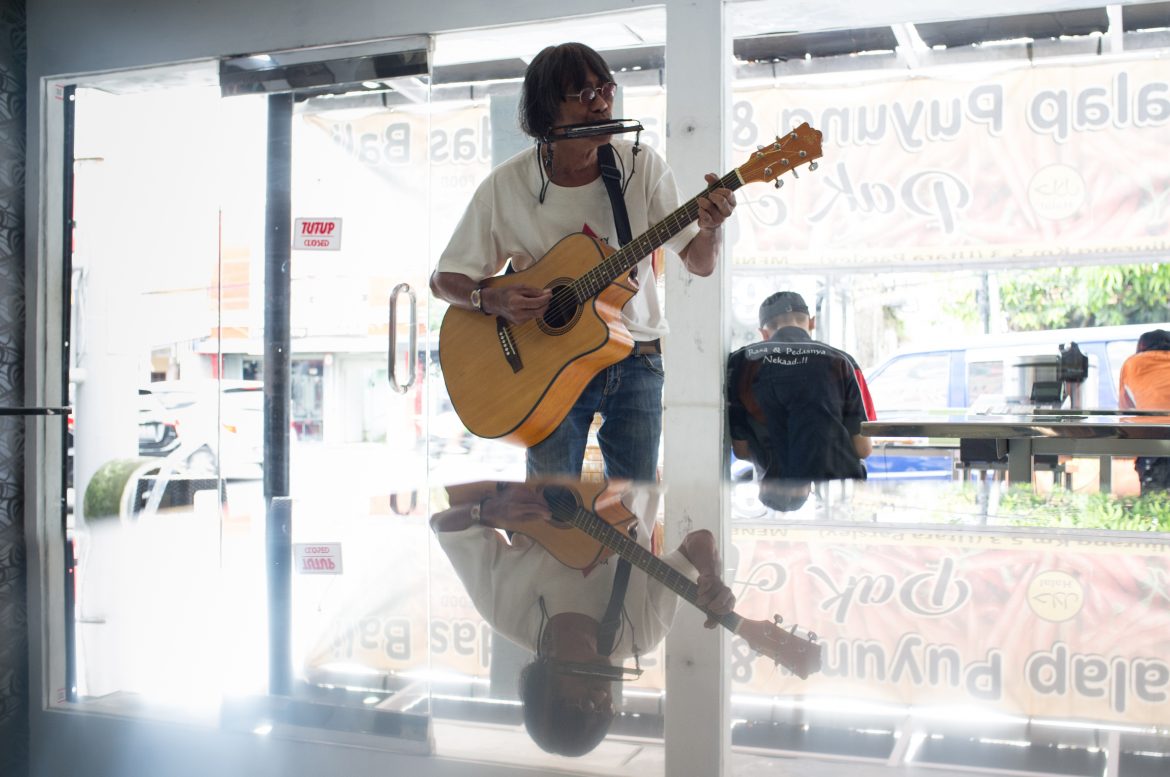 Thursday morning (3/7), a 64-year-old man welcomed Balairung into his serene residence. The neatly arranged musical instruments and charters in his living room reveal his profession in the music field. Known as Pieter Lennon, he is an iconic busker from Yogyakarta who is often found singing the song The Beatles along Kaliurang Street.

Although he only started singing The Beatles song exclusively around 1990, the man whose real name is Pieter Budie Yatmo has been singing since he was a university student. As a student, he was still singing secretly because he thought his parents would not approve of his profession. Even though he realized that his ability was not in the academic field, Pieter still used his thinking skills to succeed as a busker.

This is the reason Pieter chose The Beatles as his trademark. The Beatles’ songs had a high selling power in the world at that time. As an economics student, he saw and took advantage of this selling power to establish his name as a unique busker. “Now you can see that Pak Pieter dared to live only by singing Beatles songs,” he said.

This position is not achieved as easily as turning the palm of the hand. Before starting to determine his route on Kaliurang Street, Pieter had time to sing from village to village. At that time, Pieter was forced to sleep in a different place each day and only returned home on weekends. He also explained the difficulty of busking in the village, from house to house. Unlike a food stall, the house is not a public place, so he can’t busk freely.

Even after singing on Jalan Kaliurang, Pieter still faced other challenges. He explained that there are many places to eat and cafes around Kaliurang Street that prohibit the entry of buskers. Although he did not agree with the policy, Pieter still respected their choice and only went to places that were friendly to buskers. Pieter did not just go to places to make money, but also to entertain.

Behind the challenges, Pieter was always level-headed and did not want to find trouble. He casually said, “Nothing is difficult. As long as we live it sincerely and always give thanks to God everything will run smoothly. ” Sincerity and always being grateful are the keys to Pieter in facing life. For him, God will give more if he is enthusiastic and continues to work hard.

When busking, Laju Kopi is one of the locations Pieter often goes to. One of the workers, Mubit, told me that Pieter had been active busking at the cafe since the first day the cafe was open. Although there are a number of other buskers who often pass this cafe, Pieter stands out for his polite nature and always completes his songs. He also did not forget to tell the title of the song he sang. Not a few also sang together, some even recorded Pieter while singing and tagged him on social media. “Pak Pieter is polite and cool, he also introduces Beatles songs to the young people here,” added Mubit.

Pieter is indeed active on social media, including Instagram, Facebook, and Twitter. There he also includes his cell phone number to make it easier for people who want to contact him. In this account, Pieter often shares his musical activities. “I have social media just to share activities. Not for popularity, ”he explained.

Pieter’s love for The Beatles led him to meet the Beatlemania Jogja community. This community, which was founded on September 29, 2002, has members from various backgrounds with similar interests to The Beatles. Apart from that, this community quite often carries out various activities related to The Beatles, one of which is broadcasting Beatles songs on Sonora FM every Tuesday from 20.00-22.00. This was done to strengthen the relationship between fans and treat longing for the Beatles.

Balairung had the opportunity to meet the chairman of Beatlemania Jogja, Pungky Starr, and several of its members, one of which was Juni Kwan. Juni told me that Pieter was her neighbor at Terban when she was in college. Although Pungky had known Pieter through his friend, they only became close after he joined Beatlemania.

They appreciated Pieter’s dedication to always finish songs throughout his singing career. Juni shared one of her experiences that illustrates this dedication. Pieter happened to have the same birthday as the date Beatlemania was founded. While singing on stage while filling out Beatlemania’s birthday, Pieter’s son and several Beatlemania members surprised him by bringing a cake and singing Happy Birthday to the stage. However, Pieter continued the song until it was finished. “So we wanted to surprise him, but instead we were surprised,” said Pungky.