The People Working Hand in Hand Through “Solidaritas Pangan” 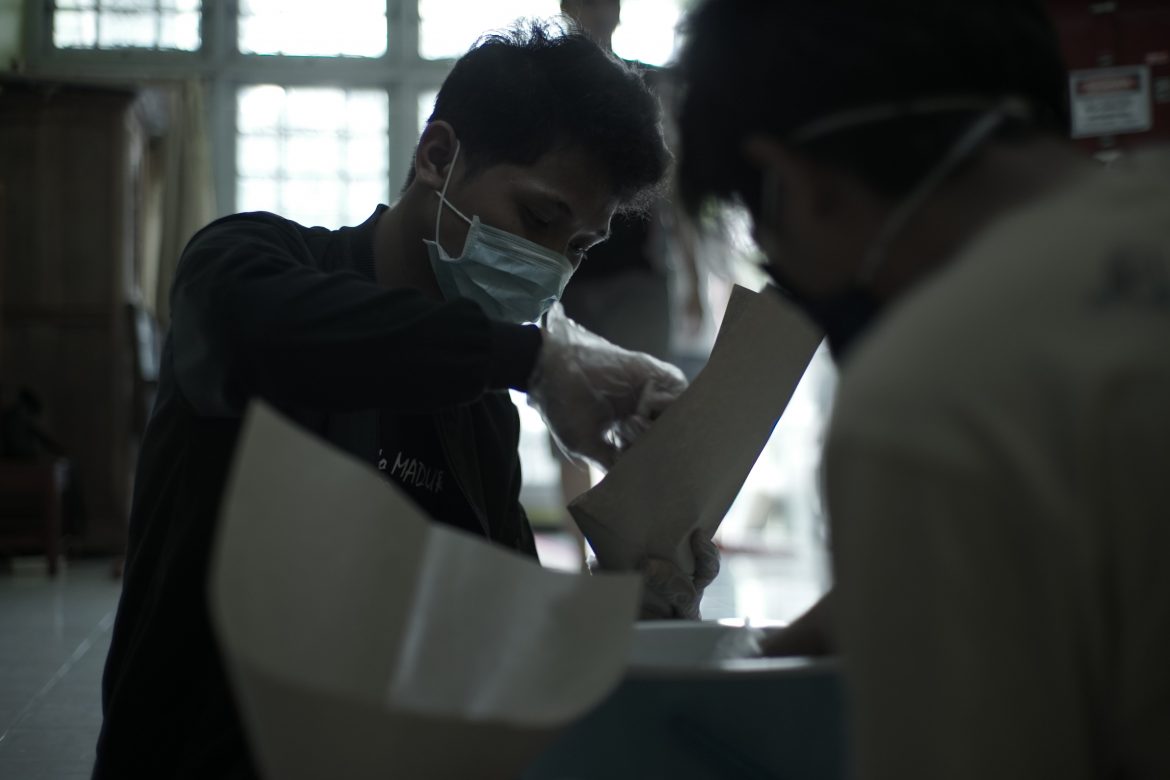 For more than a month, an office located behind the Condong Catur Station serves as a public kitchen. Out of several other public kitchens, this one found itself at the northernmost point, so it is widely known as the North Kitchen. Through phone calls, Doni Fajar, the owner of the office, recalls that the origin of the North Kitchen began at one of his friends’ places. The kitchen itself relocated to the office after Doni had the idea to cook himself. As a result, up until this point, the North Kitchen is located at Doni’s place of work.

Not all of the rooms at the office function as a kitchen. Since the beginning, Doni’s office has a place to cook located in the front. However, ever since the office became a public kitchen, the kitchen was expanded to include the living room. The volunteers cut and wrap as much as 80 packs of rice a day in the kitchen. Every day, there are around five volunteers that cook, cut vegetables, wrap the food, and wash the cutlery. These activities go on from noon till the evening.

Other than Doni’s office, a resident’s house in Cipokojajar Village, Piyungan, Bantul has also been repurposed as a public kitchen. Because of its place in Piyungan, this public kitchen is called the Piyungan Kitchen. Atik, a volunteer and kitchen owner, stated that the initiative and establishment of the public kitchen began in early April. Herself along with three of her neighbors became the cooks of the kitchen.

The Piyungan Kitchen can go through around 9 kilograms of rice and turn them into 70 packs of rice with side dishes. The cooking at the Piyungan Kitchen starts at one o’clock in the afternoon and ends at five in the evening during the month of Ramadan. The volunteers then share the cooking with the locals, especially the elderly, disabled, and the underprivileged.

The North Kitchen and Piyungan Kitchen are two of eleven collective public kitchens independently established by the people of Yogyakarta in the midst of the COVID-19 pandemic. Joined together in the Jogja Food Solidarity or Solidaritas Pangan Jogja (SPJ), these eleven kitchens are spread in the Sleman Regency, the City of Yogyakarta, and the Bantul Regency. Initially, there were four kitchens, Ngadiwinatan Kitchen, Gamping Market Kitchen, Prawirotaman Kitchen, and the Seyegan Kitchen, then it developed into eleven kitchens to date.

The existence of SPJ is based on the care of the volunteers for those who experience economic hardships during the COVID-19 outbreak. SPJ volunteer, Syafiatudina, said that her house in Ngadiwinatan was one of the first four kitchens formed. Initially, Dina raised funds from her closest friends to buy packaged rice from her neighbors who owned food stalls or angkringan. The packaged rice was then distributed to vulnerable informal workers around her house. These activities lasted for several days until one of Dina’s friends introduced her to three other kitchens that had done similar things. From then on the term, SPJ is used to mean the collection of public kitchens. “The name SPJ was only used when the other kitchens joined,” said Dina.

Dina continued that each kitchen has the autonomy to take care of its own operations. “Each kitchen determines their own workflows, their menus, manage their own distribution, and their own funds which they obtain from donations,” explained Dina. This autonomy is given because of the different conditions faced by each kitchen. Each kitchen also has a person in charge of reporting the kitchen’s operation in the coordination group.

To sustain its activities, SPJ accepts donations in the form of groceries, money, medicine, masks, and hand sanitizers. The donations are received from the Yogyakarta community. Donations in the form of money can be wired to the account of one of the volunteers that can be found in the SPJ Instagram page. Apart from money wiring, the community can also directly provide assistance to the SPJ kitchens. 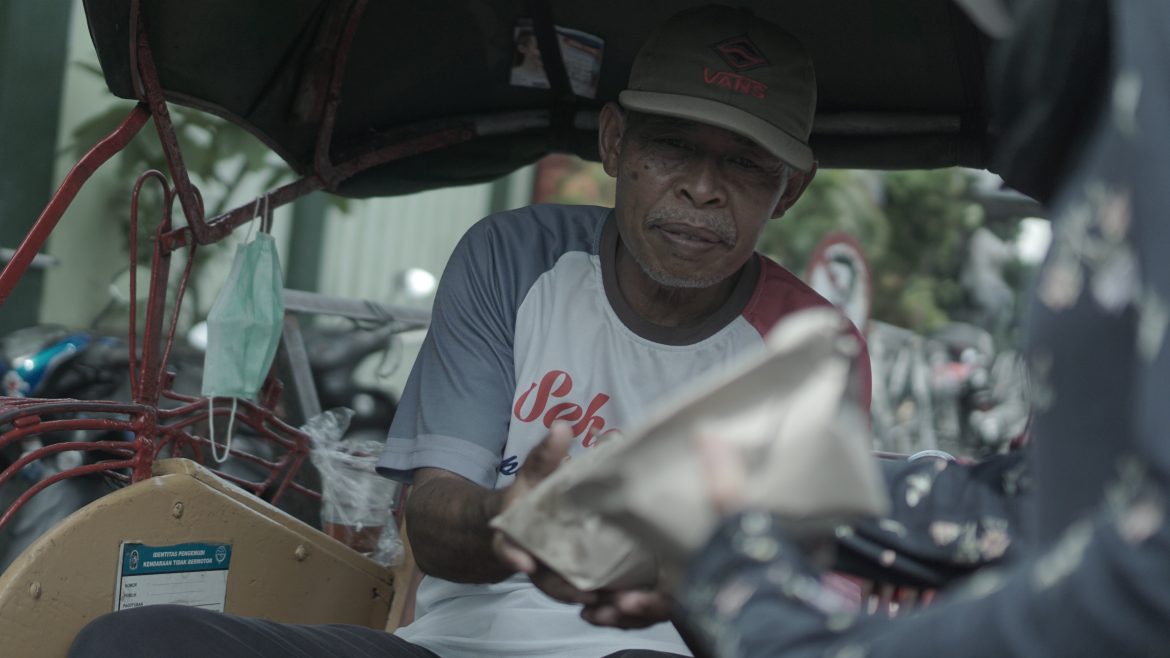 Other than assistance from the community, several farmers from the Temanggung, Sindoro, and Kulonprogo area also provided assistance with agricultural products. One of the contributors is the farmers who are a member of the Kulon Progo Beach Farmers Association or Paguyuban Petani Lahan Pantai Kulon Progo (PPLP-KP). PPLP-KP is a farmers association that was founded in 2006 to refuse the building of a sand mine in the Kulon Progo Regency.

Widodo, the PPLP-KP coordinator, said that the reason to help the movement is purely humanitarian and the will to help those who are in need. The collection of essential foods such as rice and vegetables are carried out by each village voluntarily and collected by SPJ volunteers periodically. “The farmers here set aside their crops to be collected by our friends at SPJ from Jogja,” stated Widodo.

In addition to Yogyakarta, there are also similar solidarity movements in other areas. One of which is the Madura Cares COVID-19 (MCC). Starting from the city of Bangkalan, now the solidarity movement has expanded to several other cities on Madura Island.

The emergence of MCC was due to the reduced income of some Bangkalan residents during the lockdown. Agil Laksamana Putra, one MCC’s coordinator, recounts by phone. “The income of street vendors, which normally could be up to one hundred or two hundred thousand, is now less than half of that,” explained Agil. Then, Agil discussed with some of his friends which came to the idea to establish a public kitchen that became MCC. Other than that, he was also inspired by the SPJ movement that he knew from a WhatsApp group.

Initially, Agil and his friends formed a team of volunteers to spread the publications to the public and to raise funds. When the donations from the community started to mount, they chose a coordinator in each regency to determine the kitchen’s operations. “We appointed several coordinators because we realized the conditions in each region are different,” said Agil. Finally, after all the preparations were deemed complete, they opened the public kitchens on April 1st.

Activity results are documented periodically. The volunteers of SPJ and MCC, in addition to documentation, also report their shopping for a given day, how many are produced, and the location of the distributed packaged rice. This information is then uploaded by the administrator to the Instagram page of SPJ and MCC as a form of transparency to the public. 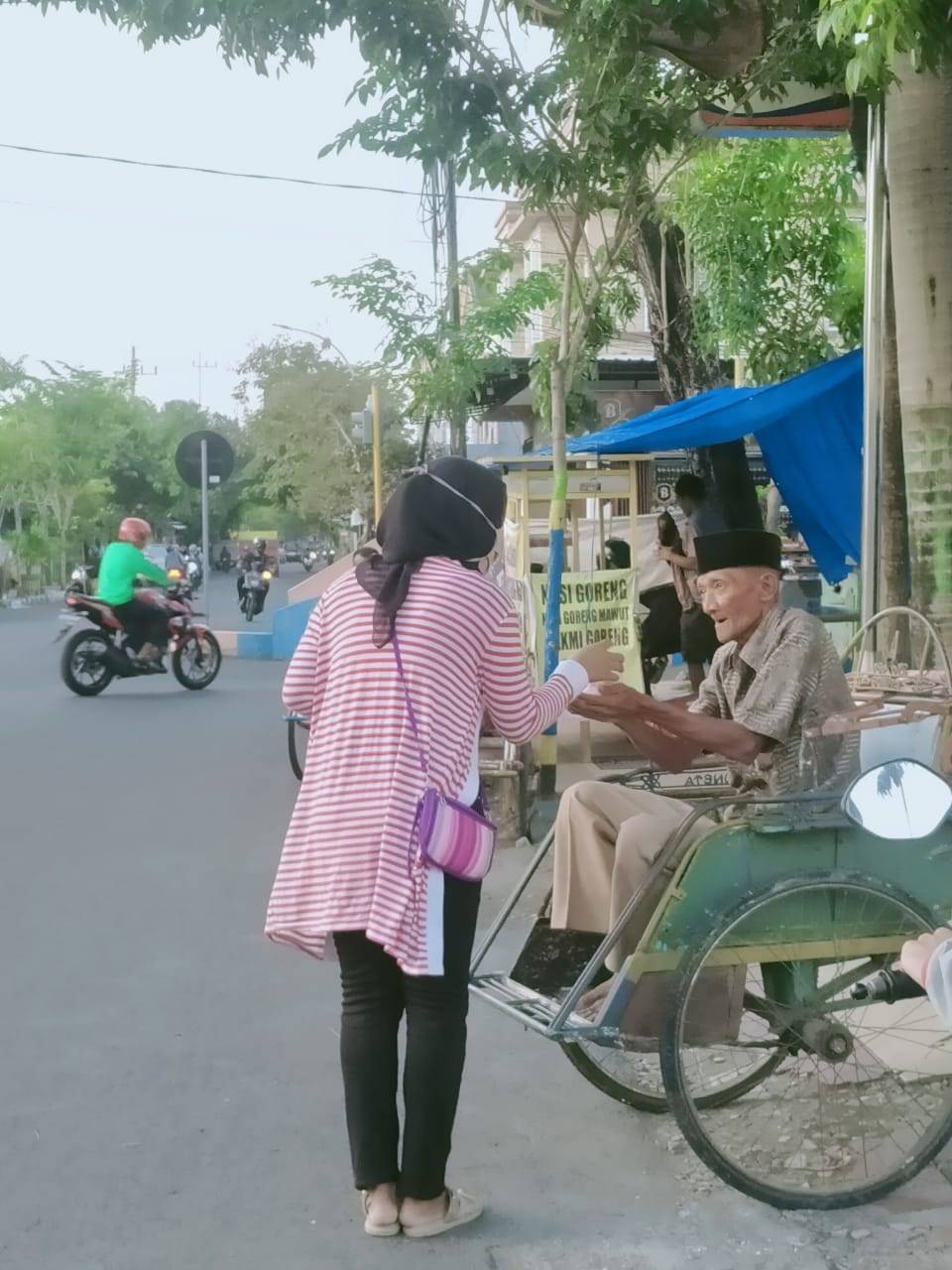 During their development, SPJ and MCC often face hardships and the need for assistance to continue their operations. Both Agil and Dina stated that the number of donations sent to their kitchens is running low, even though there are quite a few kitchens to sustain. The dwindling funding was made worse with the increase in prices for groceries. In order for the donations to grow, they often distribute pamphlets inviting people to donate along with an account number through social media.

The uncertainty in the number of volunteers has also become an issue. In Yogyakarta, normally volunteers would help by finding the nearest kitchen from their home. Meanwhile, volunteers in Bangkalan have to divide into groups and take turns to work in order to compensate for the lack of personnel. Usually, the group will work in shifts for a day or two. “In Bangkalan alone, up to mid-April there were only 17 volunteers and they could not be deployed at one time,” said Agil.

What SPJ, MCC, and other food solidarity groups in several regions have done is a form of informal social security. This was stated by Mulyadi Sumarto, lecturer at the Department of Social Development and Welfare, Faculty of Social and Political Sciences UGM, when Balairung contacted him by phone. According to him, community initiatives to provide social assistance are determined by certain conditions and situations. In this case, the need for food, being met by the community in the form of food solidarity groups in various regions.

Mulyadi added that the emergence of food solidarity groups in various regions is a positive sign. According to him, it shows a willingness to help each other in society. This can complement the lack of social security provided by the government in the form of a social safety net during the COVID-19 pandemic. “Informal social security can save people from the worst situation when the state is unable to fulfill the welfare of the people,” said Mulyadi.

Initiatives like these emerged because the state was slow in responding to the people’s condition as they are being choked by the pandemic. For Mulyadi, the state is obliged to provide social security, because it is a form of the state’s acknowledgment of the rights of its citizens. The pandemic and social restrictions are causing more and more people to be vulnerable. “Social security from the state is important for times such as this because I believe that the poverty rate will rise,” Mulyadi explained.

Agil and Dina also realized that the active role of the state to ensure the rights of the people is important. According to Agil, the government should ensure the fulfillment of the people’s rights before enacting a social restriction. In line with Agil, Dina considers that what the volunteers are doing cannot fully solve the problems at hand. “The existing solidarity movement is only scratching the surface of the problems that should be resolved by the government,” said Dina.