Pos Teratas
Reducing Pollution Through Habitual Walking Lifestyle
The Absence of Law Enforcement in Handling Sexual...
A Brief History of Discourse on Animals in...
ARTJOG: About Time, The Past Always Sold
Student’s Freedom of Speech Under The Shadow of...
Tracing The OGBV Cases Management During Pandemic in...
Student Demands amid the Unclearness of Gelanggang Mahasiwa...
World AIDS Day Commemoration: Discrimination and Social Stigma...
Hypnotherapy, Alternative Complementary Therapy to Support Mental Health
EwasteRJ and Indonesia’s Electronic Waste Crisis
In-DepthNews 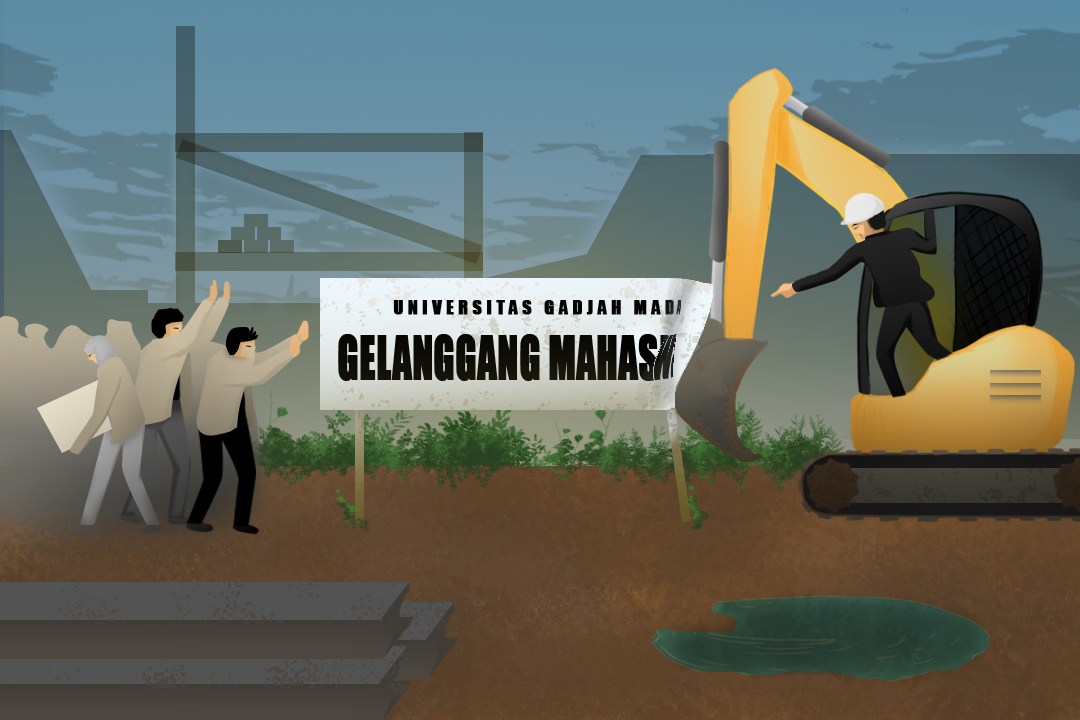 “We refuse move! Delay the eviction until the COVID-19 outbreak is over!” Several members of the UGM Student Activity Unit (UKM) protested on their respective Instagram stories in April 2020. The action was a form of protest from UKM members against the transfer of UKM goods which was not conducted in proper communication.

According to Satriya Umbu, Chairman of UGM UKM Communication Forum (Forkom) for the 2020 period, UGM Student Affairs Directorate (Ditmawa) workers suddenly moved UKM goods without involving any UKM members. Not only that, some items were even lost in the process. So far, Ditmawa has not replaced the lost items, even though they have been reported.

During the pandemic, the Gelanggang Mahasiswa turned into a volunteer post for handling COVID-19 impacts, called Gelanggang Bergerak. It was the Gadjah Mada Alumni Family (Kagama) Gelanggang and students who initiated the establishment of the post.

Agreeing with Cak Man, Umbu also revealed that the role of the secretariat in the Gelanggang Mahasiswa is very important. According to him, there are several types of work for UKMs that cannot be done in the open. Some of these jobs, among others, are the procurement of internal organizational meetings, storage of valuables, archive storage, and so on.

However, he also believes that the Gelanggang Mahasiswa needs an open space. Because, according to him, so far, UKM members have always complained about the lack of open space in the Gelanggang Mahasiswa to hold large-scale meeting activities. “So, in the renovation, if possible both are available, both a secretariat and a co-working space, instead of eliminating one of the other”, assert Umbu.

According to Umbu, good communication is the key so that the interests of all parties related to the renovation can be accommodated. Umbu then mentioned that the development at the CIMB Niaga Digital Lounge at the Faculty of Economics and Business (FEB) UGM was not accompanied by good communication. The FEB dean does not involve students significantly in the process. As a result, the secretariat of the organization was turned into a co-working space such as planning at the Gelanggang Mahasiswa.

Muhammad Fuadi Najiyulloh, Chair of the 2020 FEB UGM Student Executive Board, revealed that the dean of FEB UGM only contacted students for dialogue when the development contract had been signed. The construction of the CIMB Niaga digital lounge itself was inaugurated on February 17, 2020. In fact, the development issue has emerged since 2017. “More or less the case is almost the same as in the Gelanggang Mahasiswa, the difference is that the organization’s belongings are moved by members of the organization themselves,” said Fuad .

Responding to the lack of socialization regarding the renovation of the Gelanggang Mahasiswa, the BALAIRUNG team tried to contact representative from the university. Budi Prayitno, as the Planning Director of UGM, said that the Chair of the UGM MWA, Pratikno, is the party who has the right to make various decisions regarding the renovation agenda of the Gelanggang Mahasiswa. However, when contacted, Pratikno actually revealed that he was not in charge of the matter. “That’s the rector’s business,” said Pratikno via WhatsApp message. Pratikno then asked us to interview the Planning Director of UGM, Budi Prayitno.

Budi also said that he had been the architect of the renovation of the Gelanggang Mahasiswa. As a designer of the project, Budi has explained the design for the renovation of the Gelanggang Mahasiswa to the Minister of PUPR, Basuki Hadimuljono, and Pratikno. In addition, he has also disseminated the designs he made to UGM UKM members and supervisors.

“Now that I am no longer an architect in the renovation plan, the renovation design of the Gelanggang Mahasiswa has changed again,” said Budi. According to him, one of the crucial changes in the latest design is the presence of a partition in the co-working space that can be adapted to the needs of students. In contrast to Budi’s design, a co-working space without dividers.

Budi then said that Ditmawa was the party that took care of the socialization of the latest Gelanggang Mahasiswa renovation design. However, UGM Director of Student Affairs, Suharyadi, actually said that Ditmawa did not deal with matters related to the renovation of the Gelanggang Mahasiswa, including the socialization of the latest designs. “The decision regarding the renovation rests with the Planning Directorate, not the Ditmawa,” which was his response via WhatsApp message.

Responding to the various uncertainties in the renovation of the Gelanggang Mahasiswa, Hesa ​​hoped that the policies related to the renovation could change to better accommodate the interests of students. Because, when the renovation is complete, it is the students who will directly feel the impact of these policies. “To achieve all of that, we can start by building a good and fair communication between students and the university,” concluded Hesa.