The Political Buzzer’s Drone in the Gejayan Memanggil Strike 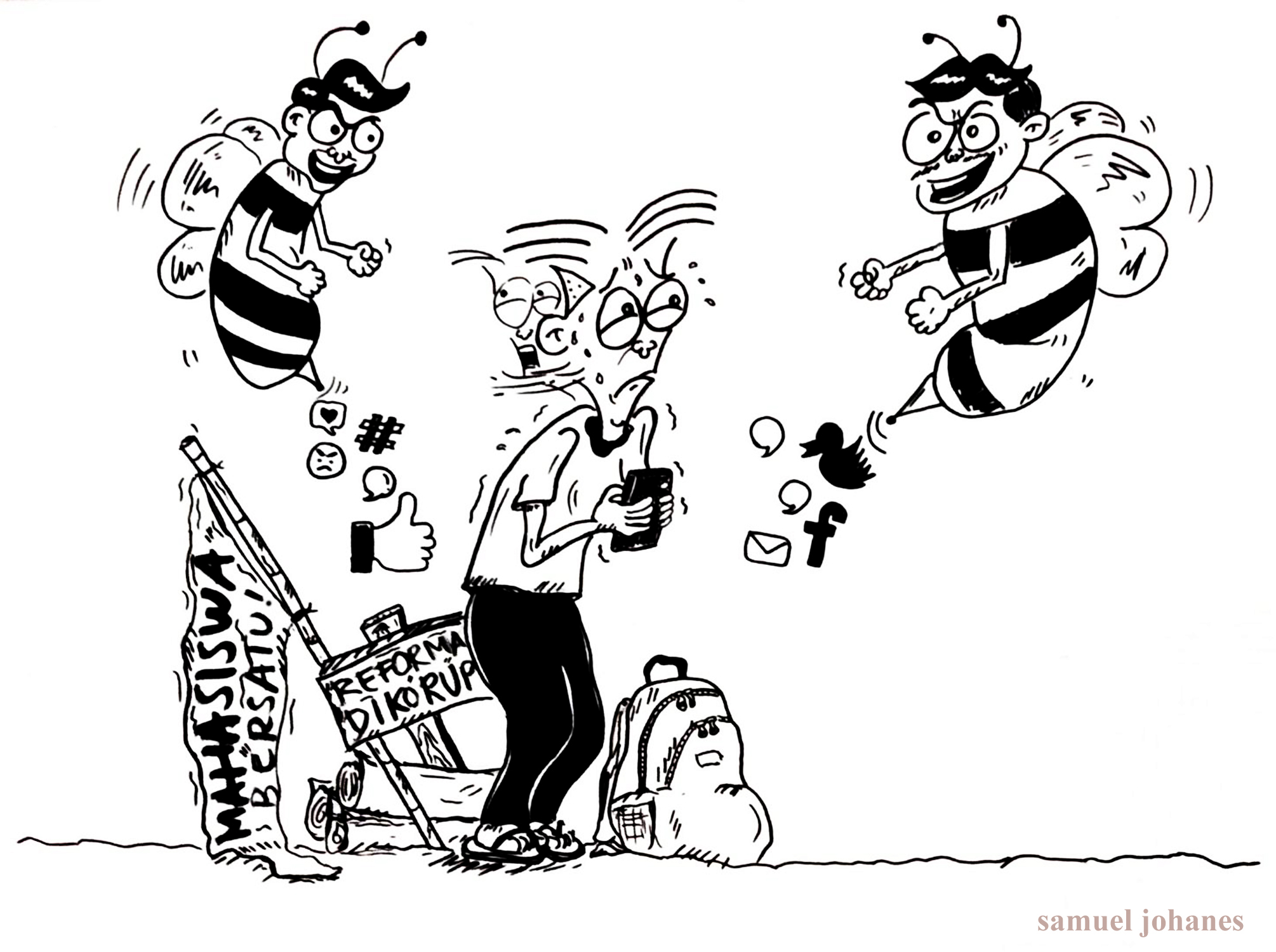 From 2014 to 2019 People’s Representative Council (DPR) decision to ratify the Corruption Eradication Commission Bill (RUU KPK) at the end of their term drew various reactions, both from the public and students. Controversial articles in the RUU KPK encourage students from various universities in Yogyakarta to initiate the Gejayan Memanggil movement by voicing seven demands.

In two times of Gejayan Memanggil movement, the buzzer still exists. The buzzer is the man using their social media accounts to spread information from one product or service. In the past, the buzzer was used only for economic purposes, but today the buzzer begins to be used for political agenda. According to the Center for Innovation Policy Governance (CIPG), the buzzer involvement in the political agendas has begun since Jakarta’s governor election in 2012. But the exertion of the buzzer in a wider scope of political agenda has done in the 2014 presidential election.

“To respond spread hoax, we still follow the information from the official Instagram account,” said Nailendra. The availability of the official account is used by the ARB to anticipate confusion and to directly communicate with the people.

Rayest Irgi Alfarest, a student of UPN “Veteran” Yogyakarta who has involved in the strike, said that the political buzzer responded to the information he shared with hoax posters. “Another political buzzer will support that hoax story by campaigning that the movement is ridden and adding the wrong hashtag,” told Rayest. According to Rayest, the political buzzer intends to distancing the students and the people.

But, not all people see the political buzzer as a bad thing. Ali (42) who is from Yogyakarta and preferred not to tell his real name, sees that the political buzzer plays a role as the distributor of information. “If the messages could be accounted for and do not violate the regulation, they may bring positive impacts,” he said.

“The student’s enemies of the movement are the group of people who are trying to frame that student movement in varies negative sense,” explained Nyarwi Ahmad S.I.P., M.A., Political Marketing and Communication Experts of Faculty of Politics and Social Sciences Gadjah Mada University. Nyarwi also said that the established narration by the political buzzer followed by the individual or group interests or anybody who pays them.

“The students could be labeled as the voluntary buzzer because of voicing their opinions by not be paid and working consciously,” Nyarwi told. But the paid buzzer usually voices their narration via social media, because the information can spread out in a short time.

Nyarwi’s explanation is proven by Ismail Fahmi that has researched the hashtag #GejayanMemanggil 2 in the Drone Emprit, an analysis platform that focuses on social media research. The result, for Fahmi, hashtag #MahasiswaPelajarAnarkis or #TheStudentsAreAnarchist was initiated by the account @SetiapHariGA. It succeeds in establishing the negative narration about the student’s strike on Twitter.

Fahmi said, by the phenomenon in today’s social media, the core thought is transformed to be a hashtag (tagar). “On the time of Gejayan Memanggil 2, the students have been divided into two groups,” he said while presented the data according to the Twitter hashtag. The first group is the Yogyakarta students who posted the #GejayanMemanggil2 hashtag. On the other side, the second group included the Jakarta students who joined giveaway prizes by posting the #MahasiswaPelajarAnarkis hashtag.

“The students should have a new hashtag for countering the buzzer’s hashtag, with another core thought,” Fahmi said. Similar to Fahmi, Nyarwi argued that political buzzer uses droning-oriented tactics. “The presence of the political buzzer is to manipulate the narrations for bringing out the context and making people confuse,” he explained.

Nyarwi also cited the thought of Elisabeth Noelle-Neumann about the theory of Spiral of Silence. He said, today people fear to be isolated so that they follow the dominant opinions. Minority group, he said, is being more inferior to speak up their opinion. “When the buzzer fills in the public space, the objective information can be distorted from true into false,” he told.