Pos Teratas
Industries’ Hidden Plot Behind Climate Denial
Indonesian Government Priority Policy through Mitigating Pandemic Covid-19
Implementation of CRISPR-Cas9 in Human: Risks and Controversy
The Right to be Forgotten Amidst (in the...
Examining Policies and the Nature of Sin Tax
Diplomatic Art from an Ex-Cricket Star
Kicking Away the Ladder: Ha Joon Chang’s Critique...
UGM Mental Health Service is in Limits
The Political Buzzer’s Drone in the Gejayan Memanggil...
The Dilemma of Indonesian Lecturer Research in the...
In-Depth

Intelectual Genocide, UGM in the Shadow of the ‘65 Tragedy 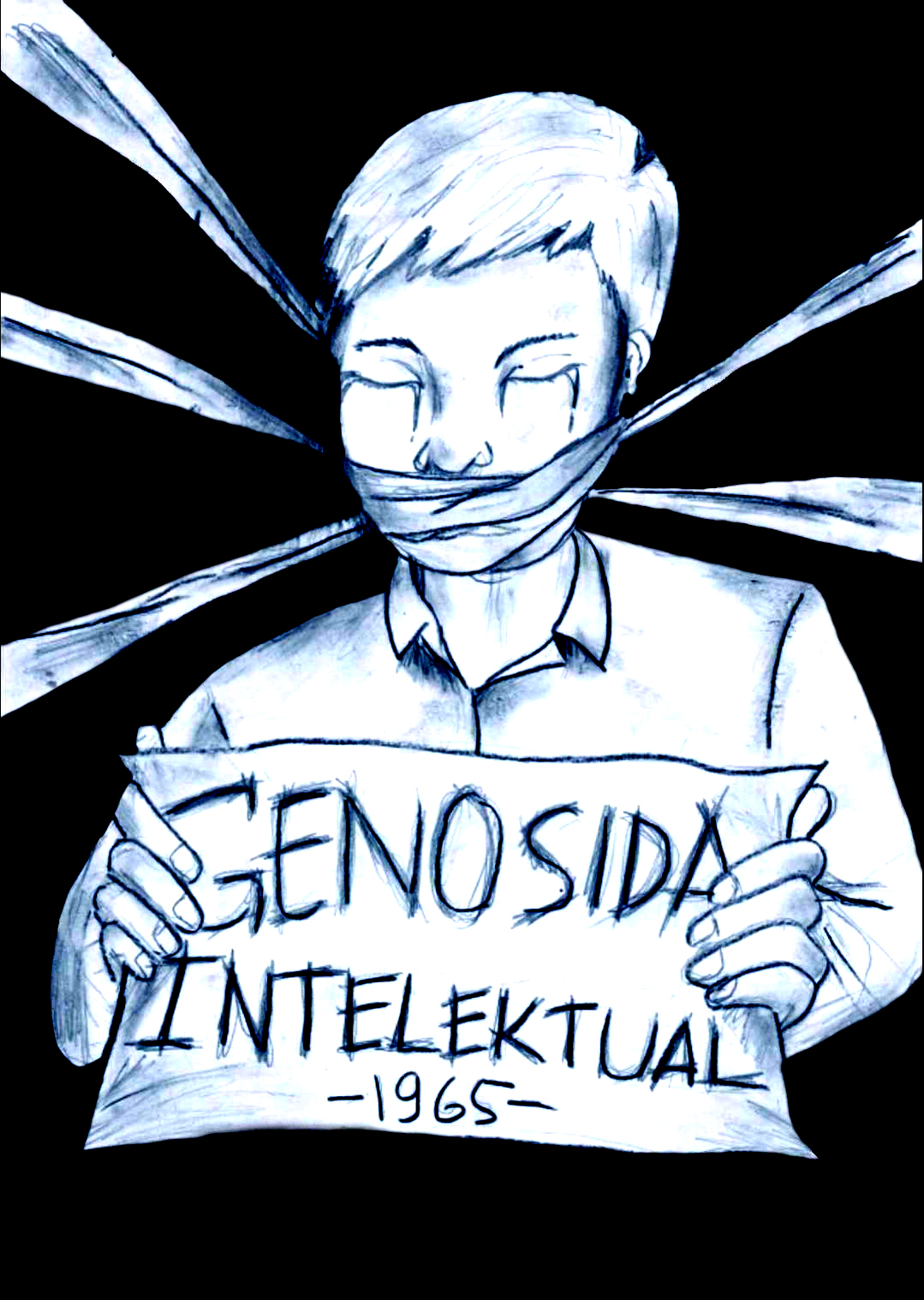 “In the period of 1965-1966, there were massacres throughout Indonesia against suspected communists. Those who were affiliated or suspected of having ties with the Indonesian Communist Party (PKI) were arrested and killed. Those that were caught but were not killed have to endure incarceration, forced labor, and discrimination for a long period of time, even until today.”

The ‘65 affair impacted not only ideological and political problems but also education. UGM as an institution of higher education was affected. With the issuance of Decree No. 1/dar 1965 by the Minister of Higher Education and Science (PTIP), all organs suspected of being affiliated with PKI were prohibited from operating and their members were put on trial. Institutions that were being banned included student organizations such as the Indonesian Student Movement Concentration (CGMI) and the Indonesian Student Association (PERHIMI). CGMI and PERHIMI members who held important positions in the Student Council (DEMA) and the UGM Student Council Commissariat (KODEMA) also experienced the impact of the ‘65 affair in the form of a screening and dismissal process.

Based on an examination in the UGM archives, several decrees were found related to the dismissal, arrests, and removal of lectures and students who were deemed involved in G30S. Prog. Herman Johannes, UGM’s Rector from 1961 to 1966, signed the letters. Through the Rector’s Decree No. 15 of 1965, UGM temporarily deactivated several members of the faculty KODEMA who were suspected of being affiliated and were members of CGMI and PERHIMI.

The issuance of the decree was a follow-up to the PTIP Minister instruction No. 02/Dar/1965 regarding the freezing of CGMI and PERHIMI student organizations. UGM in the critical times after the ‘65 affair, to be precise in early 1966, had received the arrival of the Army Command Regiment (RPKAD) commander at the time, Sarwo Edhie Wibowo. The Lieutenant-General of the TNI visited UGM and spoke in front of the students regarding the role of the Mahakarta Regiment (now Student Regiment) in eradicating G30S. This fact is gathered from a guest book containing a list of activities organized by the campus during the 1960s, which is stored in the UGM archives.

Regarding organs that were considered to be PKI’s under bow, Muhayati, who at that time was the treasurer at the Faculty of Medicine’s KODEMA, admitted that many of her friends who were members of CGMI were arrested. She said that some of the students who were arrested were not PKI members. “Their ideology was similar to leftist movements because they stood up for the little people,” she said.

Prof. Dr. Ichlasul Amal, professor of Political Science at UGM, said that the post-G30S situation was quite tense. He explained that the campus was split politically between the pro-Soekarno and anti-Soekarno camps. The Professor of FISIPOL UGM expressed how fierce the hostility between the two camps made the campus atmosphere less conducive. According to him, clashes between pro and anti-Soekarno students were not rare.

Amal also revealed that in a heated political situation, UGM itself was not firm in determining its position. “They were not helping or anti to anything,” he explained. Amal added that Herman’s incentives attitude in 1966 was the cause of a large scale student demonstration. The students wanted UGM’s attitude to be assertive. Amal also said that in the end Herman stepped down from his position as rector, not only did he step down, Herman was also jailed for three months.

Leftist views, Amal admitted, dominated UGM at that time. He said there was a significant number of students and lecturers at UGM who are sympathetic to leftist ideology. According to him, this has caused many to be affected by the campus ideological filtering. One of the lecturers who disappeared was a Sociatry lecturer. “Even though the lecturer was a good researcher,” said Amal.

Furthermore, in one corner of the UGM Museum, there is a certificate of appreciation dated December 19, 1965, that was given by RPKAD to UGM as an institution. The certificate explicitly states that the RPKAD expresses its gratitude to UGM for providing assistance in all forms in the context of eradicating the Gestapu/PKI in Central Java. This award certificate seems to emphasize UGM’s role in helping to clean up the people considered to be the culprits of the “coup”.

According to data obtained from Dr. Abdul Wahid, lecturer in History at UGM said that the number of lecturers and students deactivated by UGM far exceeds other campuses. According to these data, the number of campus residents caught in the governments “catching net’ reached 3,121 people and this places them first. In data, UGM’s “catching net” appears to be far more effective in comparison to Universitas Padjadjaran in second place, with a total of 252 people and IKIP Bandung in third place with 80 people.

In accordance with the decree regarding student dismissal, Muhayati said that students could not continue their study. “ It is impossible for me to go to college again, I will not be accepted,” she said. Muhayati added that she received information about her dismissal from a fellow medical student who saw her name on the announcement board. Before seeing the announcement board, Muhayati knew that she would be dismissed.

Abdul Wahid dubbed the events in the UGM academic world after G30S/PKI as Intellectual Genocide. He cited the loss of a generation of intellectuals, products from the 1950s, including those who became exiles. Even though, according to him, many of them received scholarships from Soekarno to study abroad, such as from China and several countries in Europe.

As reported by the BBC, some Indonesian students who were sent abroad to continue their studies during the Soekarno administration were reluctant to return to their homeland. The shift of power from the old order to the new order is thought to be the cause. For example, Ronny Surjomartono, was a UGM student in 1963 before he was sent to the Czech Republic to continue his studies at the Prague School of Economics. He was reluctant to return to his homeland because of the Soeharto government’s policy of imprisoning suspected communists and groups that supported Soekarno. He settled abroad as an exile.

According to Willy, to maintain its essence on the scientific stage UGM made changes to its commitments. UGM, which was previously a socialist campus, turned into the people’s campus, and it was a natural change because it has to follow the mainstream. One proof of this change was the replacement of Prof. Herman Yohannes with drg. Nazir Alwi as the rector. “It was impossible for UGM to remain committed to a leftist ideology when the government had a different view,” said Willy.

Willy explained, on an occasion before the commemoration of Indonesian independence on August 17, 1966, UGM Rector, drg. Nazir Alwi made a speech. The speech said that UGM should be a reflection of the New Order’s brilliance. Willy interpreted that Nazir Alwi was an extension of the New Order’s to be rulers. Willy also added there existed New Order slogans that contained total corrections for all of the Old Order’s mistakes. One of them is the plan to cooperate with any agency again. As the New Order government then reopened relations with the United States.

Until now, UGM itself is still unclear in determining its position regarding its involvement with the G30S. “It is not our capacity [UGM] to carry out an investigation,” said Dwikorita when interviewed by the Jakarta Post in 2015. Dwikorita at that time wanted UGM to focus on scientific development and did not want to be trapped in dealing with UGM’s dark history.